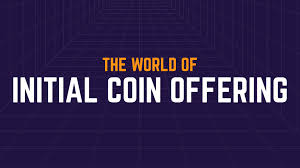 For early stage companies, venture capital isn’t the only name in town these days.

Startups built on blockchain technology—distributed ledgers that power cryptocurrencies like Bitcoin—are increasingly enticed by the option of hosting an “initial coin offering,” or an ICO, as insiders call it. Instead of accepting some fund’s money in exchange for equity stakes, these firms decide to issue their own digital currencies, or tokens, that anyone can buy in a crowdsale. Proceeds from the auction of these virtual shares help fund the businesses.

The analogy to be made is to an initial public offering, when a company traditionally lists on a stock exchange. The difference is that whereas IPOs are well-defined and understood by governments, ICOs are murkier. The U.S. Securities and Exchange Commission and other regulatory agencies are currently investigating the practice. The tokens, proponents say, are not quite like a security, yet not quite like a currency either. They’re something in between.

The fundraising tactic, which is sort of like a crypto-financial twist on a Kickstarter campaign, has several advantages over alternatives. First and foremost, it’s eminently liquid. Backers’ funds are traditionally tied up in their bets until the companies “exit,” going public or selling out. In this case, investors can cash in and out whenever they like, converting tokens into Bitcoin, Ether, and fiat currency at their leisure. No wait necessary.

Beyond flexibility, technologists view ICOs as enabling new business models for open source projects. Today, it’s not uncommon for developers to volunteer on various collaborative efforts, tinkering in vital code repositories free of charge. With ICOs, coders have a means of generating value; the more successful a project, the higher market participants may appraise it, the more rewards contributors may reap (assuming they are token holders). In theory, it’s a virtuous cycle.

The approach has already produced early successes. The market capitalization of Ether, a digital currency associated with the distributed computing network Ethereum, which you can read about in this Fortune feature, has rocketed more than 500% in value since the beginning of the year. It’s no surprise that other projects are entertaining the prospect an ICO too.

There are downsides though. Given how few rules currently govern the sector, investors run the risk of getting scammed. In the absence of due diligence requirements, pump and dumps, Ponzi schemes, and buggy foundational software can run rampant. Even Ether’s debut was marred by the spectacular bust of a much-hyped project, a decentralized venture capital firm called The DAO, built atop its network. (This was due to a hack, rather than malicious intent of the founders.) One must weigh the promise against the peril.

If you’re considering getting in the game, just remember never to wager anything you’re not willing to lose.