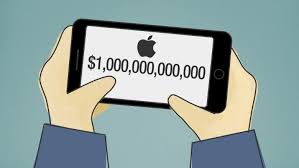 A few months ago, it looked like Apple (aapl) was many, many years away from reaching the landmark its fans were predicting: Planting its flag as America’s first $ 1 trillion company.

But since the presidential election, the iPhone maker’s shares have staged one of the most breathtaking displays in the history of capital markets. After closing at $ 109 on Nov. 7, Apple has surged to $ 144, lifting its market cap from $ 573 billion to $ 757 billion.

That $ 203 billion increase alone is equal to the entire value of Pfizer or 80% of the market cap of General Electric.

By riding the Trump Bump from one all-time high to the next, Apple’s own market cap is now 32% shy of the $ 1 trillion mark. So given the fundamentals, how long should it take to reach the thirteen-digit milestone?

Today, Apple is trading at a much improved, but still modest, price-to-earnings ratio of 17.3. So let’s assume that valuation holds. In that scenario, investors are expecting future returns equivalent to the earnings yield or inverse of the PE. That’s 5.8%. Add inflation of two points annually, and the bogey is 7.8%.

Apple is delivering 1.6% of that return in dividends. For a typical company selling at a 17 P/E, the balance would come from earnings growth of 6.2%. So if Apple fit the conventional mold, its stock price would wax in lockstep with earnings, rising just over 6% annually and hitting the $ 1 trillion summit in a bit less than four years, by around Valentine’s Day of 2021.

But Apple is the ultimate maverick. Rather than reinvesting its earnings to generate growth, it’s shipping literally all of its profits back to shareholders. The numbers are extraordinary. In its last three fiscal years ended in September of 2014, 2015, and 2016, plus Q1 of 2017 (ended in December) Apple posted net earnings of $ 156.5 Billion. Over those 13 quarters, it’s distributed $ 38.1 billion in dividends and spent $ 119.1 billion repurchasing shares, for a total of $ 157.2 billion.

Put simply, Apple’s been channeling every dollar in net earnings to shareholders in dividends and buybacks. So unlike conventional companies, it isn’t reinvesting its profits to generate growth. In fact, if the practice continues, Apple will furnish shareholders with the entire 7.8% expected return in buybacks and dividends. Investors will simply receive the 1.6% dividend yield and another 6.2% from shrinking the share count. The latter would automatically swell EPS by the same amount and raise the share price 6.2% a year.

But Apple would be delivering those gains mainly by lowering shares outstanding, and that would seriously slow its quest for a $ 1 trillion valuation. Hewing to the current path would reduce the count by over 17%, from 5.33 billion to 4.4 billion shares. In four years, Apple’s stock would hit around $ 180. But its market cap would reach “only” $ 790 billion. Shareholders will do fine, but Apple won’t get a whole lot closer to the awesome goal for which it’s the only American contender.

The trillion-dollar quest spotlights the crucial question about Apple: For years, it hasn’t found profitable places to invest its gigantic earnings. As a result, Apple’s profits have merely zigzagged, growing just 8.8% over the last four years to $ 45.7 billion in fiscal 2016. “Apple is a gushing oil well of profits,” says Jack Ciesielski, author of The Analyst’s Accounting Observer. “But given that they can’t find enough major new products to invest in, they’re giving all that money back to shareholders.”

Apple does have two routes to $ 1 trillion. First, it does spend significantly on R&D to develop everything from Augmented Reality to the Apple Watch. But though its R&D outlays are growing rapidly, they’re still small relative to its size, and lag far behind the numbers at Google’s parent company Alphabet and Microsoft. Still, it’s possible that Apple will find another iPhone. Even if it keeps the buybacks rolling, the growth in earnings from a breakthrough product could produce a fresh surge in profits, propelling is market cap to $ 1 trillion in a few years.

Clinching a big hit via R&D, though, is unlikely. Apple hasn’t done it for years. Its second option is gaining new products and technologies via acquisitions. For example, buying PayPal and Pandora would bolster Apple Pay and iTunes, or acquiring NetFlix would create a new powerhouse in TV, or clinching Tesla would advance its ambitions in self-driving cars. We’ll soon see if Apple will solve its growth problem by making big buys. If so, it’s likely that cash will be redeployed from its epic buybacks to deals heralding a new era of growth.

Because it’s giving all of its profits back to shareholders, Apple looks like a decent investment. But it will only be a great investment if it finds what it’s been lacking: new avenues for growth. And only a raft of exciting products, not a continuation of the Big Shrink, will deliver Apple to the promised land of $ 1 trillion.