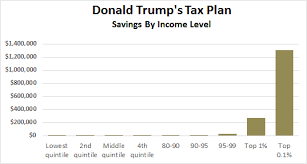 President Donald Trump is among the high earners likely to benefit from the first big tax cut working its way through Congress.

According to estimates by the Wall Street Journal, Trump could save at least $ 3.2 million a year on his taxes on rental income if the 3.8% tax—known as the net investment income tax – is repealed. (That estimate is based on an analysis by WSJ reporters that’s disputed by Trump’s representatives).

The tax was originally included in the Affordable Care Act as a way to generate more revenue to pay for Obamacare’s increased medical coverage, and it has long been part of the Republican agenda to repeal it.

(More from Fortune: The Big Problem with Trump’s Tax Plan)

The tax only applies to individuals making over $ 200,000 a year, and married couples making at least $ 250,000, and includes income earned on rent, capital gains, interest, and dividends.

As Bloomberg reporter Ben Steverman has noted, most high earners scarcely take a hit from the 3.8% tax. The NITT doesn’t get beyond three figures unless you’re in the top 1% of earners.

WSJ notes that Hillary Clinton paid $ 3,517 because of the tax in 2015, according to her tax return, but it’s impossible to know exactly how much Trump has paid because he has not released his tax returns.