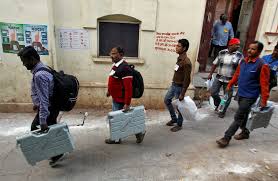 NEW DELHI Prime Minister Narendra Modi will learn on Saturday whether his popularity is sufficient to clinch a win for his party in the country’s most populous state, where its sights are set on an absolute majority to consolidate its position.

Modi campaigned for more than two months to win the northern state of Uttar Pradesh, the most important election he has faced since triumphing in the 2014 general election.

As the campaign ‘face’ of his Bharatiya Janata Party (BJP) Modi, and his election strategist Amit Shah, can take credit if they win – but may face a backlash from sidelined party elders if they come up short.

“The results will redefine the prime minister’s political destiny and his future course of action,” an aide to Modi in the capital, New Delhi, told Reuters.

Post-election surveys suggest Modi has done enough to come first in Uttar Pradesh, home to one in six Indians, but may fall short of an outright majority in the 403-seat state assembly.

The exit polls, which are often wrong in India, also put the BJP ahead in three of four other states that will declare election outcomes on Saturday.

If results do hand Modi an outright win in Uttar Pradesh that would be an endorsement of his stewardship of Asia’s third-largest economy after his high-risk decision last November to scrap high-value banknotes worth 86 percent of the cash in circulation.

A strong BJP showing would be welcomed by investors counting on further economic reforms – including the launch of a national sales tax – in the absence of any credible opponent who might halt Modi’s march to a second term in 2019.

Short of a majority, the BJP could see opponents block its path to power in the state by forming a coalition, although Modi’s party will also look to convince its smaller rivals to join forces.

“If the BJP fails to secure a majority, then Modi’s economic decisions will be questioned and his failure to create jobs will impact his political future,” said Mohan Guruswamy, who heads the Centre for Policy Alternatives, an independent think-tank.

The BJP’s opponents include an alliance between the Congress party and the ruling Samajwadi Party, a tie-up that caught Modi’s party off guard. A better than expected showing by a third party could complicate the picture as results filter out.

The BJP is also eyeing victory on Saturday in the northeastern state of Manipur, northern Uttarakhand state, and the southern resort state of Goa, while an alliance of which it is a member in Punjab state is predicted to lose badly.