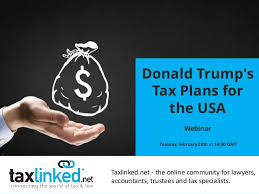 Imagine a world where dozens of America’s biggest exporters, among them the leading names in pharma, aerospace, and computers, pay zilch in taxes. That world may not be imaginary for much longer.

Of course, just the perception, if it gets out, that the Border Adjustment Tax (BAT) could create a class of privileged players that gorge on “corporate welfare” could sink the controversial proposal. That would likely take the “incredible” tax package that President Trump pledges to enact down with it.

It all comes down to the BAT, which is the centerpiece of the House Republican manifesto for tax reform.

Speaker Paul Ryan and his House allies reckon that the measure will generate around $ 1 trillion in extra revenue for the government in the next decade. Without that cash, the Republicans will need to downsize or even abandon their plan to lower the corporate rate from 35% to 20%, and maybe scuttle their signature tax relief for the middle class. Although President Trump and his aides are waffling on the BAT, they’re seriously weighing an endorsement, for a basic reason: It’s the only idea on the table that raises the flood of new revenue needed to pay for the historic reforms.

But even if the administration backs the BAT, the measure has a colossal fatal flaw that the Democrats and corporate opponents could exploit to bludgeon the tax plan.

To understand why this is not just possible but probable, it’s crucial to understand how the BAT works. Although President Trump frequently refers to something resembling the BAT as a tool for raising exports and curbing imports, that’s not its goal. The BAT is designed to broaden the U.S. tax base and raise the revenue needed to fund the Republicans’ pro-growth tax agenda.

The BAT imposes a 20% duty on imports and grants rich tax benefits for exports. But in theory, neither importers nor exporters would sell more goods or book more profits than they do now. Nor would the BAT shrink our trade deficit. (That’s the role of an entirely different Trumpian plan, the 35% punitive tariffs the president pledges to impose on exporters who manipulate their currencies or slap heavy duties on US exports. More on that here.)

If the BAT works as advertised, the value of the dollar will spike by exactly the amount of the tax, or 20%. That’s because importers will collect fewer after-BAT dollars to purchase the pesos and yuan they send back to Mexico and China. The lower demand for foreign currencies will depress their value versus the greenback. The dollar’s rise would would then lower the cost of the components and labor that go into Mexican or Chinese-made cars or clothing translated into dollars, precisely offsetting the burden of the BAT duties.

Hence, Mexican and Chinese importers would sell the same volume of goods, manufactured at lower cost measured in dollars, at the same prices as pre-BAT. As for exports, the tax rebates would compensate for the higher dollar cost of U.S.-produced goods sold in Ireland or Japan, so export sales and prices would also remain the same. Once again, that’s the theory.

(More from Fortune: The Peril and the Promise of the Trump Economy)

But here’s what BAT fans seldom discuss, and the media mainly overlooks: Even if the measure works as advertised, it poses both a PR problem and a basic design problem. The BAT looks unfair because it appears to be handing exporters a huge tax windfall. And it really is unfair, but for the opposite reason than that, and that detractors will likely say. It really penalizes exporters, not rewards them. In many cases, the exporters won’t be getting enough of a tax break to compensate for the rise in the dollars that renders their products far less profitable on global markets.

Take the example of a U.S. medical equipment-maker selling heart devices in Ireland. Say that in 2018, the devices cost $ 41.7 million to manufacture and market, and they’re sold to an Irish distributor for $ 50 million, for a 20% margin. The manufacturer pays the new 20% corporate income tax rate on the $ 8.3 million in profits, for a bill of $ 1.66 million.

Now, let’s assume the BAT reigns in 2018. Under the BAT, the manufacturer reports none of that $ 50 million in revenue for tax purposes, because it all comes from exports. In addition, it gets to subtract all of its costs, in this case $ 41.7 million, against fully-taxable revenues from business in the U.S., say sales of catheters and other gear for angioplasty to a hospital in Cleveland. We’ll say that its domestic business contributes 50% of sales, and its pre-BAT U.S. margins are also 20%. In theory, that break reduces its taxes by $ 8.3 million (20% of $ 41.7 million).

Sounds great for the device-maker. But keep in mind that the exporter is no longer making money on its sales in Ireland, since the 20% cost increase measured in euros (because of the dollar’s appreciation) eliminates its 20% margin. But if it gets the full $ 8.3 million benefit that both eliminates all taxes on its US business and also generates a rebate on what’s left over, it will book exactly the same after-tax profits as before.

In our example, however, the exporter erases all of the earnings that are left––the 50% coming from the US––and still has 75% of its tax loss remaining. Under current law, it could use those losses as a “carry-back” against taxes paid in the previous two years, and potentially recoup all of the full value of its exemptions. The House proposal, however, eliminates all carry-backs. But it does aim to aid exporters by shelving the two-year limit on loss carry-forwards. They can be used forever.

But that doesn’t solve the problem. Given the currency increase that will come with a BAT, big exporters in aerospace, tech, and pharma are pretty guaranteed to losses permanently. There will be no future profits on which to offset those tax credits. We’ll spare you the details, but in previous example, the device-maker––for all the appearance that it’s getting fat tax breaks––would suffer a drop in after-tax profits of 37% under the BAT. That’s typical of any company where exports contribute half of total revenues.

New legislation could make companies whole by rebating the 20% of the unused losses in cash. Or, the US could allow exporters to sell their credits to companies seeking to shelter earnings, which is along the lines of what Warren Buffett proposed more than a decade ago. Both solutions could be a tough-sell politically. “There could be a negative perception that large and profitable companies are getting rebates from the government,” says Kyle Pomerleau of the Tax Foundation, a nominally non-partisan think-tank that favors free market policies. “But that’s the way border adjustments work throughout the world,” adds Pomerleau, who favors the BAT.

In the absence of Treasury rebates or trading of credits, companies will resort to questionable machinations in the quest for turning losses into cash. “This really creates not just appearance issues, but bad behavior,” says Eric Toder of the Tax Policy Center. Since companies can’t use the losses themselves, probably ever, they may try to merge with players that could richly benefit from their giant and growing carry-forwards. “You’ll see this un-economic combinations,” says Toder. “You could call it the ‘lawyers’ employment act.'”