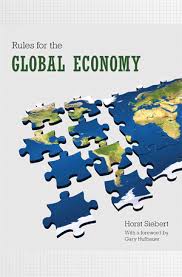 The stock market could crash. Protectionist trade policies might backfire leading to job losses. Or housing booms in some countries could go bust.

The Organization for Economic Cooperation and Development (OECD) looked into its crystal ball Tuesday, and warned that while the global economy is slowly improving now, these are some of the shocks that could derail the still-fragile recovery in the not-too-distant future.

The OECD never mentions President Donald Trump by name it is report, but the Paris-based organization made it clear it does not endorse his “America First” trade proposals, or the broader protectionist zeitgeist sweeping across the United States, Britain, and Europe.

“A roll-back of existing trade openness would be costly,” the OECD warned, noting an increase in trade barriers in the major global trading economies like the United States, Europe, and China could adversely impact GDP and jobs in those places.

The warning comes with a chart, showing about 10% of American jobs are linked to global trade. In the United Kingdom, that number is over 20%, and in Germany, it’s near 30%.

Stocks have surged to record highs recently, even though interest rates are also starting to rise and long-term forecasts for economic growth have barely changed.

The OECD warns that a “snap-back” in markets may be in the cards, as investors reassess this disconnect between equities and fundamentals.

“A sharp reassessment by markets of the future path of interest rates could result in substantial and widespread re-pricing of assets that have been supported by low bond yields,” the OECD report said.

Fueled by historically low interest rates over the last few years, countries like Canada, Sweden, and the U.K. have seen rapid increases in home prices. Now, there are valid concerns that homes are significantly overvalued in these areas and ripe for a sudden housing bust.

Measuring home prices compared to rents (a substitute for buying a home) shows these ratios are at record highs since at least the 1980s in Canada, Sweden, and the U.K., said Catherine Mann, the OECD’s chief economist in a press briefing.

That’s meaningful, she said, because it could mean these markets will be in for a shock as central banks start raising rates more rapidly over the next few years.

Overall, the world economy is still “too slow.”

The global economy averaged around 4% growth in the two decades before the 2007 financial crisis.

“The reason why this matters is because many of the fiscal stances and expectations of both consumers and businesses are predicated on this 4% more robust growth climate,” Mann said. “Even though it’s an improved pickup, it still remains modest and falls short of what we need to have in order to make good on our promises to our citizens.”