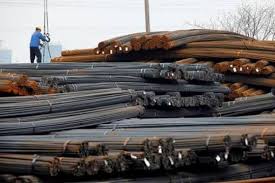 NEW DELHI India may soon mandate the use of local steel in government infrastructure projects worth billions of dollars, sources said, pitching it as a WTO-compliant protectionist measure aimed at further cutting cheap imports, mainly from China.

The government expects the move to boost sales of local companies such as JSW Steel (JSTL.NS) and Tata Steel (TISC.NS), and eventually attract global steelmakers such as ArcelorMittal (ISPA.AS) and POSCO (005490.KS) to invest in the country, five steel ministry sources told Reuters.

India, the world’s third largest steel consumer, has budgeted a record $ 59 billion for 2017/18 for steel-intensive infrastructure projects such as ports, roads, railways and power.

“The preference in procurement will enhance demand and thus production. Definitely it is ‘Make in Steel’ and thus ‘Make in India’,” Steel Minister Chaudhary Birender Singh told Reuters.

“It is preference with no compromise on quality and competitive pricing. To use domestic produce is an acceptable norm.”

A government document on the proposal, seen by Reuters, cites an article under the General Agreement on Tariffs and Trade of the World Trade Organization, allowing an exception to “procurement by governmental agencies of products purchased for governmental purposes and not with a view to commercial resale or with a view to use in the production of goods for commercial sale”.

Abhijit Das, head of the New Delhi-based think-tank Centre for WTO Studies, said the provision had been invoked by the United States in the past and India could do the same.

The protectionist move would, however, shrink foreign companies’ sales in the world’s fastest growing steel market.

Japan has already threatened to take India to the WTO over some recent steel restrictions. [nL4N1FD2V0]

India wants to nearly triple its production capacity by the next decade and acquire technology to produce higher value products including automotive steel.

“If demand picks up on account of increased government spending on infrastructure and government mandates the use of domestic steel in such projects, the domestic steel producers are fully capable of raising the production level.”

The proposal to use local steel, which will not be applicable to smaller projects, will be taken to Prime Minister Narendra Modi’s cabinet in a month, two of the sources said.

Modi, under pressure to create millions of jobs, wants steel to contribute heavily to the government’s target of raising the share of manufacturing in the economy to 25 percent by 2022 from 17 percent now, according to a steel ministry document seen by Reuters.

“In the absence of domestic capacity, India would have to largely rely on China for its steel requirement since it is the only country with adequate surplus capacity to meet India’s requirement,” said the document. “For a strategic product like steel which has uses in defense and infrastructure sector, this is a worrying proposition.”

Most Indian steel companies are so saddled with debt, however, that large-scale expansions will be difficult, analysts say. The steel industry contributes 29 percent of overall banking sector bad debt of around $ 135 billion, according to government data. [nL4N1DO1SN]

Most companies have reported losses as prices fell after imports into India more than doubled to 13 million tonnes in 2015/16 from the levels of 2013/14. China contributed to more than a third of the imports.

Following some restrictions on imports, April-to-January shipments into India fell a third to around 6 million tonnes.

“The steel ministry has found an innovative way of clearing the bad debt by ensuring procurement,” said one of the sources. “When we say we will give preference to Indian steelmakers, the fence-sitters (among foreign steelmakers) will gear up to start investing in India.”

Global companies including POSCO have made multiple field visits over the past few months but have not committed to any new projects in India.

Steel ministry officials have also unsuccessfully courted Hyundai Steel (004020.KS), including offering them a strategic stake in SAIL’s money-losing units, over the past months.

POSCO and Hyundai Steel declined to comment about their India investment plans.