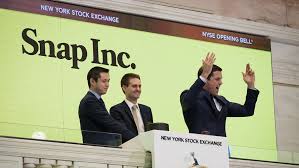 Disappearing photos might just be the future of communication. Investors seem to think so.

Shares of the parent company of photo-sharing app, Snapchat, jumped 41% to nearly $ 24, when the initial public offering opened trading on Thursday morning, giving Snap Inc. a valuation billions above even its highest previous estimates. Snapchat opened to retail investors on Thursday, 11:21 a.m. with a $ 27.84 billion valuation, based on 1.16 billion shares outstanding. On a per-share bases, that’s $ 7 higher than the $ 17 price Snap, which raised $ 4.8 billion so far, executives and underwriters had sold the stock to institutional investors.

Initial rumors said the company was expecting to seek a $ 25 billion dollar valuation, meaning investors would have given the company a price-to-sales multiple of 62. Walmart, the giant retailer, has a P/S of 0.45.

Bankers then pulled the price down to around $ 21 billion dollars, or as low as $ 14 a share, when they first took the company out to see investors on the company’s road show. As recently as yesterday, some were still expecting the stock to price between $ 14 and $ 16 a share. But the institutional investors apparently liked what they heard. Bankers moved the price for the oversubscribed IPO price, up to $ 17 when it priced on Wednesday night. That was before it started trading, and the price zoomed higher.

At $ 24 a share, investors are paying $ 68 for a single dollar of sales. That’s even on a day when stock market sentiment isn’t great, with stock market off slightly from the post-Trump speech high it hit on Wednesday.

Yes—caveats aside, Snap is a company in demand, but it might also be a supply squeeze pushing the price of the stock upward.

According to people familiar with the matter as heard by Fox’s Charlie Gasparino, Snapchat also decided reallocate some of offering for retail investors to family and friends. That’s shares typically available to company executives’ and the underwriters’ business associates, family, and employees at its initial offering price.

According to Snapchat’s latest IPO filing with the Securities and Exchange Commission, Snap was offering 7% to family and friends (14 million out of the 200 million shares now on the market).

A higher stock price then would not only benefit Snap’s executives and underwriters, but also the family and friends who own that 7%, according to Jay Ritter, a professor of finance at the University of Florida.

On the bright side, at least Snap’s stock is less expensive than at least one company that has been billed as a cautionary tale. While investors are willing to pay nearly $ 70 for a dollar of Snap’s sales, they were willing to pay an incredible $ 79 for a single dollar of Twitter’s sales when the stock first hit markets.