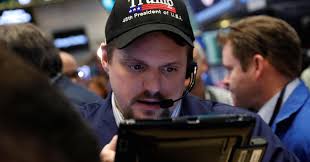 This Amazing Stat Suggests the Trump Bump Will Continue

On Tuesday, during Donald Trump’s Congressional address, the president took credit for helping to boost the stock market nearly $ 3 trillion since the election.

President Trump may be able to take credit for a good deal more. And if history is any guide Thursday’s more than 100 point drop in the Dow Jones industrial average will only be a temporary dip.

Sam Stovall, the chief stock market strategist of Standard & Poors, wrote on Wednesday morning, if you look at historical trends the stock market, which is already up roughly 6% this year, is likely to keep going higher.

The reason has to do with January and February, and momentum.

The S&P 500 saw a 1.8% gain in January and 3.7% bump in February. Stovall says that marks the 27 time since 1945 that the index rose in both months. Every time that has happened, the S&P has ended up the year in the black. And within those years, the index rose over the course of the remaining 10 months of the year, with the only exceptions being 1987, which was ravaged by the stock crash, and 2011, which ended down but was an essentially flat year. Then there was last year, when the S&P 500 fell 6% in the first two months of the year, but the market went up to end the year up 13%

So it doesn’t happen all the time.

Nonetheless, in those years when January and February has been up, the average return for the entire year has been 24%, or 18 percentage points higher than where we are now. If copy that average, the Dow could end the year pretty close to 24,000. We just past 21,000.

Some have warned that Trump should be wary of taking credit for the stock market gains, because when the Dow falls he may have to take responsibility for that as well. But it looks like, at least for now, there will be more credit to take than blame.