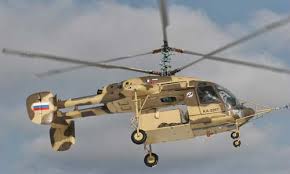 Russia to start deliveries of helicopters to India in 2019

ABU DHABI Russia will start initial deliveries of military helicopters to India in 2019, with assembly and manufacturing to follow in Asia’s fastest growing economy, the chief executive of state-owned manufacturer Russian Helicopters said on Monday.

India and Russia signed an agreement in October to jointly manufacture 200 of the KA-226T helicopters for the Indian Armed Forces.

Both countries have agreed to cooperate in energy and defence as India seeks to modernise its armed forces and build a nuclear industry and sanctions-hit Russia looks for investment and new markets.

“The joint venture is in process and the first delivery will start in 2019. After-sales service will also be provided in India,” said Andrey Boginsky, who took over as CEO in January.

Some 60 helicopters will be delivered to India and the remaining 140 will be assembled or manufactured in India, he said at the International Defence Exhibition in Abu Dhabi.

The company has started production of the advanced medium multirole Mi-171A2 helicopter, with four deliveries set for Russia this year, he said.

China has shown an interest in the Mi-171A2, he added, without elaborating.

Overall sales in 2017 are expected to grow at least 15 percent as demand for civil helicopters increases.

“We expect to sell 220 helicopters this year,” he said compared to 190 sold in 2016. Military helicopters account for two thirds of sales.

“There is demand for civil helicopters and we plan to increase volumes,” he said, adding that a key market is Iran, where there is demand from the oil and gas sector.