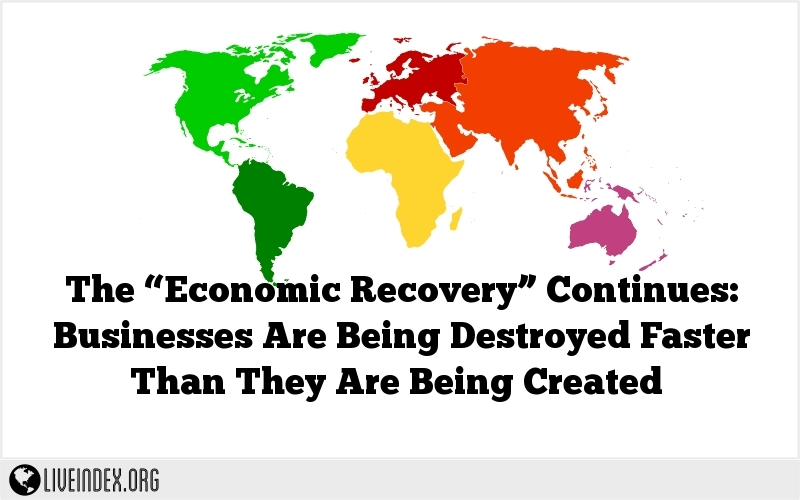 The “Economic Recovery” Continues: Businesses Are Being Destroyed Faster Than They Are Being Created

And this mirrors an earlier study conducted by economist Tim Kane.  According to his analysis of U.S. Department of Labor data, the following is how the decline in the number of new business jobs per one thousand Americans breaks down by presidential administration…

As you can see, this is a problem that has been building for decades and that has accelerated under the Obama administration.

We are strangling small business creation to death, and as a result the number of Americans that are self-employed just keeps going down.

And keep in mind that throughout this entire time the U.S. population has been growing.  So the numbers in the chart above should be going up steadily as the population grows.  But instead they have just kept going down.

Meanwhile, the “economic recovery” is continuing in the corporate world as well.

On Tuesday, we learned that Office Depot is going to be closing 400 stores.

Why would that happen if the economy was actually getting better?

When this was announced, shares of Office Depot rose about 20 percent.

I can never understand why that happens.  You would think that when a business makes an announcement that essentially says “our business is failing” that it would cause people to dump the stock.

In any event, this comes on the heels of an announcement by Staples back in March that it was going to shut down 225 stores in the United States and Canada.

So where will we buy our pens and paper from now on?

If the economy really was “recovering”, you would think that demand for office supplies would actually be on the rise.

But the only places where the economy is “recovering” is in places such as Washington D.C., New York City and San Francisco.

Those at the top of the pyramid are doing well, but almost everyone else in the country is really suffering right now.

When you kill off small businesses and the entrepreneurial spirit, it tends to increasingly funnel money to the very top of the food chain.  And this is precisely what is happening in America at this point.  In a recent article, Charles Hugh Smith included a chart that shows how average household net worth in the U.S. breaks down by quartile…

As you can see, the bottom 50 percent are really not that much above zero at all.  In the old days, it seemed like almost everyone was “middle class” in America, but now that is rapidly changing.

We can see this increasing divide in the real estate market as well.  According to Bloomberg, sales of million dollar homes are booming, but sales of homes at the low end are plunging…

“Million-dollar homes in the U.S. are selling at double their historical average while middle-class property demand stumbles, showing that the housing recovery is mirroring America’s wealth divide. Purchases costing $ 1 million or more rose 7.8 percent in March from a year earlier, according to data released last week by the National Association of Realtors. Transactions for $ 250,000 or less, which represent almost two-thirds of the market, plunged 12 percent in the period”

So this explains why it is almost impossible to find an affordable home in San Francisco, but the overall homeownership rate in the United States has dropped to the lowest level in 19 years.

But even in our wealthy enclaves there are signs of deep economic trouble.  For example, in New York City the number of homeless children has soared to a new all-time high…

They’re just like other kids except they have a secret. They are homeless.  Children are living hidden lives in plain sight. They are part a growing number of low income families who find themselves with no way out but they are working hard to find a solution. It’s a big issue. And it’s growing. More than 23,000 children sleep in homeless shelters every night, an all-time high, according to the Coalition for the Homeless.

The only “recovery” being experienced in America is the one that is happening on Wall Street, in boardrooms in Silicon Valley and in the halls of power in Washington.

In the rest of the country, retail stores are closing at the fastest pace that we have seen since the collapse of Lehman Brothers, 20 percent of all families do not have a single member that is employed and 49 million Americans are dealing with food insecurity.

There is no way that we are ever going to have a broad-based economic recovery in this nation if we continue to destroy small businesses.  They are the lifeblood of any economy and they are the primary engine of job creation.

Sadly, our politicians seem completely clueless about all of this.  So they will continue to do the same things that they have always been doing and then wonder why the economy never seems to turn around.