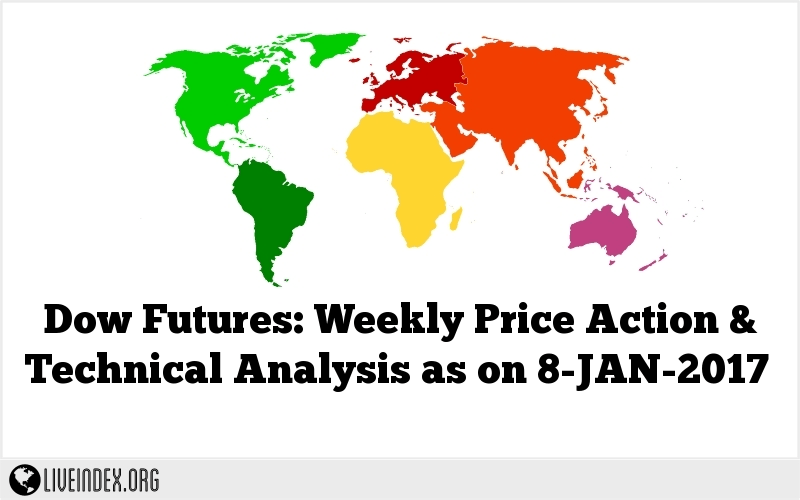 The Dow has started year 2017 with a Weekly bullish reversal. On the Monthly timeframe, the price action is very tensed upwards, penetrating considerably the upper Bollinger band.

Pay attention though that the Weekly reversal up took place relatively far above the 8 EMA, meaning that it is very tensed and extreme right now. Sometimes the market does a shakeout in such situations, especially after reaching short term (or near) targets.

The price has taken out the Daily swing High at 19922. A good bullish opportunity might develop if we see some consolidation on the Weekly range for at least two more days, respecting the current Weekly High at 19925, or a new High made at the beginning of the new week. Taking the Weekly High (or the new High made) after at least two days is a good signal to reach the next major target of the first Quarter of 2016 pinbar, at 20020. In this case, the Yearly High (and all time High) is going to be taken out.

Pay attention that the Yearly bar of 2016 ended as a bullish pinbar on sloping 8 EMA, very strong. The thrust up mentioned above – if happens – is the confirmation for a huge move towards 24500 (don’t forget though the huge Stop as well, below the Yearly Low).

We are very near the target of the Quarterly pinbar of the first quarter 2016, at 20020 (though practically we may say that it has already reached it).

Higher targets are the last November Monthly spring, target at 21000, and the 2015 Yearly bullish pinbar on sloping 8 EMA, aiming towards the 21300 area.