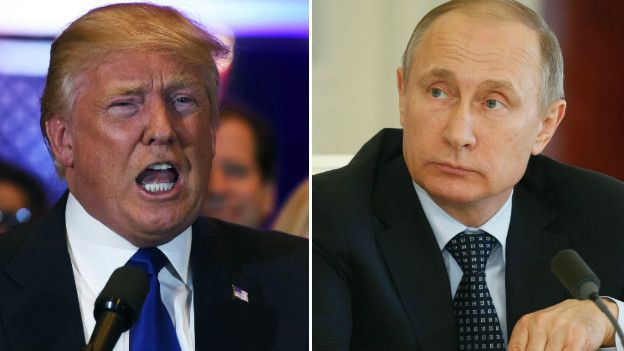 U.S. President-elect Donald Trump upped the stakes on Friday in a back-and-forth exchange with President Vladimir Putin over nuclear weapons that tested the Republican’s promises to improve relations with Russia.
Offering a glimpse of how he might conduct diplomacy after taking office on Jan. 20, Trump reportedly welcomed a nuclear arms race with Russia and China and boasted that the United States would win it.

MSNBC host Mika Brzezinski said Trump told her in an off-air phone call: “Let it be an arms race. We will outmatch them at every pass and outlast them all.” The television station did not play his comments on air.

It was the second brusque comment about atomic weapons in two days from the New York businessman that alarmed nuclear non-proliferation experts worried about fuelling global tension.

The broadsides from Trump’s resort in Florida appeared to be aimed mostly at Putin even though the two men have vowed to patch up relations between their countries once the Republican enters the White House.

Trump tweeted unexpectedly on Thursday that, “The United States must greatly strengthen and expand its nuclear capability until such time as the world comes to its senses regarding nukes,” but gave no further details.

That comment appeared to be a response to Putin who said earlier on Thursday that Russia needed to “strengthen the military potential of strategic nuclear forces.”

Russia and the United States are at odds over Syria’s civil war and Ukraine but Cold War-style nuclear tensions have greatly eased in recent years. Moscow and Washington signed the New START nuclear treaty in 2010 which reduced strategic weapons and delivery systems.

Putin, accused by the Obama administration of overseeing a wave of cyber attacks against U.S. political organizations during the presidential campaign, said on Friday he had no interest in competing with the U.S. nuclear weapon program.

“If anyone is unleashing an arms race it’s not us … We will never spend resources on an arms race that we can’t afford,” he said at a news conference. The Russian president said he was surprised by State Department comments that the U.S. military is the most powerful in the world. “Nobody is arguing with that,” Putin said.

He said he did not regard the United States as a potential aggressor and said he saw nothing new or remarkable about Trump’s own statement about wanting to expand U.S. nuclear capabilities.

The United States is in the midst of a $ 1 trillion, 30-year modernization of its aging nuclear arsenal and replacement of its ballistic missile submarines, bombers and land-based missiles. It is a price tag that most experts say the United States can ill afford.

Russia, also bound by New START limits, is carrying out its own costly modernization program but is not expanding its warhead stockpile.

Trump spokesman Sean Spicer said the president-elect’s nuclear comments were meant to send a general message of strength to countries like Russia and China rather than indicate the United States planned to build up its nuclear capabilities.

Trump was elected president unexpectedly last month partly on a platform of building up the U.S. military but he also pledged to cut taxes and control federal spending. His nuclear comments suggest that improving relations with Moscow might not be easy.

Trump on Friday released what he said was “a very nice letter” from Putin dated Dec. 15 in which the Russian leader sought bilateral cooperation and a “new level” of relations. In an accompanying statement, Trump said he hoped both countries could “live up to these thoughts” rather than “have to travel an alternative path.”

The Obama administration has accused Russia of trying to interfere with the U.S. election by hacking Democratic Party accounts. Information from those hacks was leaked online, causing political problems for Democratic candidate Hillary Clinton.

“The current administration and the leadership of the Democratic Party are trying to blame all their failures on external factors,” he said at his Friday news conference.”(We are talking about) a party which has clearly forgotten the original meaning of its own name. They (the Democrats) are losing on all fronts and looking elsewhere for things to blame. In my view this, how shall I say it, degrades their own dignity. You have to know how to lose with dignity.”

Trump expressed his agreement with Putin’s view of the Democrats. “So true!” Trump tweeted Friday evening. Putin, who spoke positively of Trump before his election win, said that only Moscow had believed in his victory.

“Trump understood the mood of the people and kept going until the end, when nobody believed in him,” Putin said, adding with a smile. “Except for you and me.”