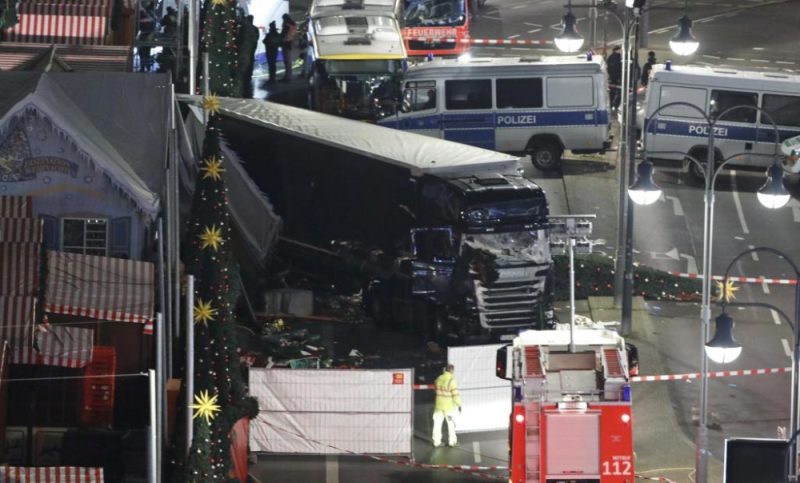 BERLIN : A truck ploughed into a crowded Christmas market in central Berlin on Monday evening, killing nine people and injuring up to 50 others, police said, in what appeared to be one of the deadliest attacks in Germany in decades.

Police said on Twitter that they had taken one suspect into custody and that another passenger from the truck had died as it crashed into people gathered around the wooden huts serving mulled wine and sausages at the foot of the Kaiser Wilhelm memorial church in the heart of west Berlin.

“We heard a loud bang,” Emma Rushton, a tourist, told CNN. “We started to see the top of an articulated truck, a lorry … just crashing through the stalls, through people.”

The incident evoked memories of an attack in Nice, France in July when a Tunisian-born man drove a 19-tonne truck along the beach front, mowing down people who had gathered to watch the fireworks on Bastille Day, killing 86 people. That attack was claimed by Islamic State. Police at the scene told German media that the crash appeared to be a deliberate act.

A government spokesman said Chancellor Angela Merkel was being briefed by her interior minister and the Berlin mayor on the situation. Police said there were no indications of further dangerous situations in the area and urged people to stay away from scene.

“I’m deeply shaken about the horrible news of what occurred at the memorial church in Berlin,” Foreign Minister Frank-Walter Steinmeier said. “Many people who visited the Christmas market today have died and even more are injured.”

The truck veered into the market at what would have been one of the most crowded times, when adults and children would be gathering in the traditional cluster of wooden huts that sell food and Christmas goods in an annual celebration replicated across Germany and much of Central Europe.

Police cars and ambulances converged quickly on the scene. Rushton told CNN the truck seemed to be travelling at about 40 mph (65 Kmh). Asked how many were injured, she said that as she walked back to her hotel, she saw at least 10. Julian Reichelt, editor in chief of Bild Berlin, said that there was currently a massive security operation under way.

“The scene certainly looks like a reminder of what we have seen in Nice,” Reichelt said.