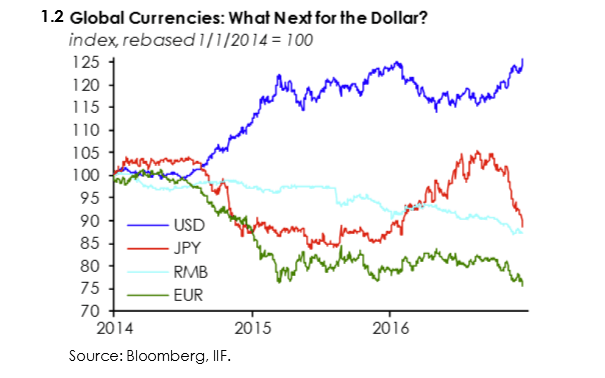 Here’s Why the Dollar Just Hit a 14-Year High

Janet Yellen just revved up the greenback. The question is whether Donald Trump will floor the pedal.

The dollar hit a 14-year high overnight and, after a brief pause for breath, is heading back to that high again Friday as financial markets absorb the consequences of what the Federal Reserve did Wednesday, and what that means for next year.

It’s not hard to boil down: the U.S. economy is strengthening, returns on capital are rising, and so will demand for the currency of the economy that’s generating those higher returns. As a result, the price of the dollar will rise, both in absolute terms (expressed in interest rates) and relative ones (expressed as exchange rates against other currencies).

But the biggest driver may be the Federal Reserve, which raised U.S. interest rates on Wednesday, at a time when few other central banks are. As Deutsche Bank strategist George Saravelos notes, the only countries in the Western world with higher rates are Australia and New Zealand, neither of whose currencies are needed on a day-to-day basis by anyone else.

“Historically, it is not only the direction of U.S. yields that matters for the dollar but also the absolute level.” Saravelos said in a note to clients Friday. “When the dollar joins the ranks of the high-yielders…it typically rallies very strongly.”

And looks like the U.S. could lead rates among the major economies for a while. Last week, the European Central Bank extended its quantitative easing program through the end of next year. President Mario Draghi call it his plan to “sustain the extraordinary degree of monetary accommodation.” The Bank of England says not even a spike in inflation is going to cause it to raise interest rates through the desperately uncertain ‘Brexit’ process. And the Bank of Japan’s fight with deflation has never ended. This month it kept its key interest rate at a record low -0.1%.

That leaves all the momentum for now with the greenback, with Donald Trump getting into the drivers seat.

The consensus is that Donald Trump’s fiscal policy will entail a cut in business and perhaps personal taxes, along with increased spending on, among other things, infrastructure. Fed officials have already warned that the economy doesn’t need stimulus per se as much as it needs growth-enhancing structural reforms, so there is a risk is that it will tighten monetary policy aggressively if Trump loosens it aggressively.

In non-econ speak, “Buckle up.” The greenback isn’t slowing down anytime soon.