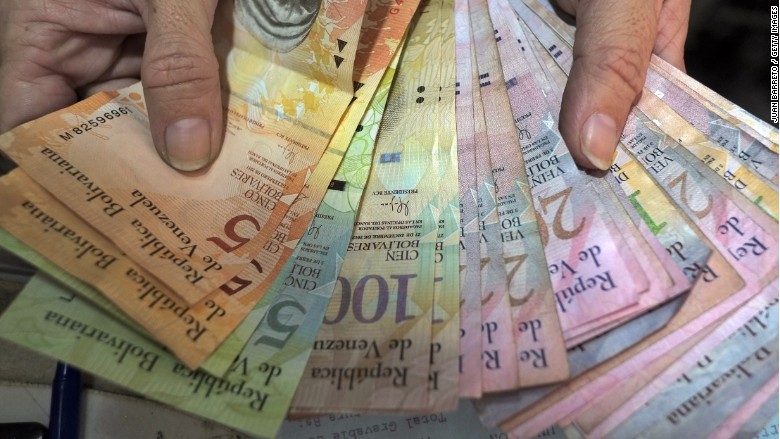 Venezuelans scramble to ditch largest bill ahead of surprise removal

Venezuelans hastily dumped the country’s 100-bolivar bill, the largest denomination, on Monday after the government said it would be pulled from circulation as the crisis-wracked nation suffers what is believed to be the world’s highest inflation.

Socialist President Nicolas Maduro said the withdrawal of the bill – worth just 2 U.S. cents on the black market – was needed to reduce contraband of the banknotes on the Venezuela-Colombia border.

The 100-bolivar note will be removed in 72 hours as of Tuesday, state media said on Monday, with new, higher-denomination bills due on Thursday.

Despite heavy printing of the 100-bolivar bills – 2.3 billion this year alone out of 6.1 billion in total – they are in short supply. Moreover, Venezuela’s shaky telecoms network means card readers often collapse.

Luis Volcanes, 36, had for six weeks withdrawn cash every day but on Monday ran around with a big brown envelope trying to deposit that same money, only to find cash machines at four banks in a row were not working.

“This seems crazy, like the government did this on a whim. I don’t know what I’m going to do,” Volcanes said as people trickled in and out of a bank in Caracas, complaining none of the machines worked.

One man unable to deposit money yelled, “This is total chaos!”

Adding to the aggravation, Monday was a bank holiday, meaning there were no tellers. Venezuelans have 10 days to exchange the notes at the central bank.

While many business were not accepting 100-bolivar bills, or warning they would only do so on Monday, poor people living day to day could not afford to reject cash.

“I’ll take everything you can give me to eat today,” said taxi driver Jose Manuel Henrique, 49, whose cash income goes entirely to feeding his two children. Still, Henrique, a former supporter of late socialist leader Hugo Chavez, was annoyed.  “The government can’t get anything right. This wasn’t thought out.”

Authorities on Thursday are due to start releasing six new notes and three new coins, the largest of which will be worth 20,000 bolivars, less than $ 5 on the streets.Maduro, a former bus driver and union leader elected after Chavez’s death in 2013, said Colombian shoppers and organised criminals were buying up the 100-bolivar bills to go on a spending spree in Venezuela, worsening shortages of basics such as flour and antibiotics.

Venezuela is heaving under its third straight year of recession, pushing millions to skip meals and medical treatment.

Many others are increasingly travelling to Colombia to find supplies. But shops across the border on Monday were displaying signs that they would not accept 100-bolivar bills, bringing business to a halt and sending Venezuelans home empty-handed.

Later on Monday night, Maduro announced in a televised broadcast that he would close the porous border for 72 hours to stem what he said was contraband of notes. His government also says Machiavellian businessmen are hoarding goods and bloating prices to sabotage socialism.

Interior Minister Nestor Reverol on Monday added that criminals were hoarding 100-bolivar bills in places such as Switzerland and Ukraine as part of a financial attack on Venezuela.  He showed photos of stacks of bolivar bills but presented no further evidence.

Economists scoff at the official line, pointing instead at strict currency controls and price fixing that hurt imports and reduce incentives for production. They said Maduro’s measure will do nothing to improve product supply.

The decision has been likened to Indian Prime Minister Narendra Modi’s move on Nov. 8 to scrap large banknotes in a bid to flush out cash earned through crime, which led to long bank queues and is expected to take a toll on the economy.

In Venezuela, there also were logistical concerns about how authorities would remove the more than 6 billion 100-bolivar bills in circulation, nearly half of all coins and notes, and whether replacement bills were ready. But some Venezuelans – about one in five of whom still support Maduro – saw a ploy by the opposition to fan fear.

“This is a sensible decision but all change brings uncertainty,” said Carlos Paez, 54, a private security guard.

At least one shop owner threw his hands up in frustration.

Lucio Colombo, 47, who sells gifts and snacks in Caracas’ wealthy Chacao district, has asked clients to pay in cash for the last two weeks because his credit card reader no longer works.

“So how do I get paid now?” he asked. “I was thinking of bringing my laptop so people can pay me by transfer – or I could just go on holiday. They are forcing me to stop working.”