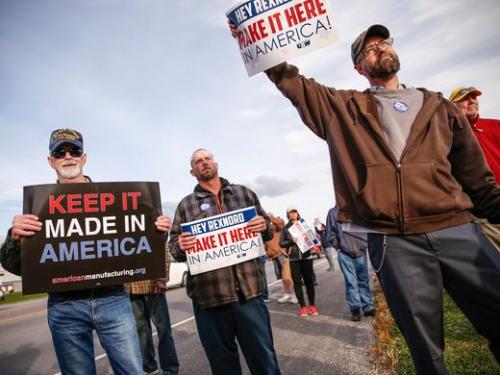 US : Trump to intervene to keep jobs at home on ‘day-by-day’ basis, Pence says

WASHINGTON President-elect Donald Trump, fresh off a deal to keep nearly 1,000 U.S. jobs in the country, will decide whether to intervene with other companies to keep them from moving jobs overseas “on a day-by-day basis,” Vice President-elect Mike Pence said on Sunday.

Pence said the deal Trump reached last week to keep Carrier, a unit of United Technologies Corp, from shipping jobs to Mexico from an Indiana air conditioner plant showed the incoming administration would confront U.S.-based firms when needed and use a carrot-and-stick approach to keep them from offshoring jobs.

The Carrier deal included $ 7 million in tax breaks to encourage United Technologies to keep the jobs in Indiana. On Twitter early Sunday morning, Trump also revived his campaign threat to slap a 35 percent tariff on imports of products made by companies that have moved production out of the United States.

“Please be forewarned prior to making a very expensive mistake,” Trump said, telling companies that moved jobs overseas would face “retribution or consequence.”

Trump has pledged to lower the corporate tax rate and roll back federal regulations to create a better climate in the United States for businesses. Trump is sending a message to businesses considering moving overseas that “things are really changing,” Pence said on ABC’s “This Week” program.

“He is going to put on the table all the tools that are going to take away the advantages of companies that for far too long have been pulling up stakes, leaving American workers behind,” Pence told ABC.

Asked if Trump would now pick up the phone to call other companies considering shipping jobs overseas, Pence said “the president-elect will make those decisions on a day-by-day basis.”

Trump’s incoming chief of staff, Reince Priebus, said he expected the president-elect would be burning up the phone lines to warn companies to keep jobs at home.

“I would not be surprised if he wasn’t on the phone with all of these companies, as many as he can to encourage them to stay, stick it out,” Priebus told Fox News Channel’s “Fox and Friends.”

Trump, who made his pledge to keep manufacturing jobs from fleeing the country a centerpiece of his campaign, already has warned another company, Rexnord Corp, an industrial supplier based in Milwaukee that plans to move a bearings plant and its 300 jobs from Indiana to Mexico.

“Rexnord of Indiana is moving to Mexico and rather viciously firing all of its 300 workers. This is happening all over the country. No more!” Trump said on Twitter on Friday.

Pence said the incoming administration was committed to living up to Trump’s campaign pledge to keep manufacturing jobs at home.

“We’re going to create trade policies that take away the advantages that these multinational corporations have had in moving jobs overseas now for decades,” he said.