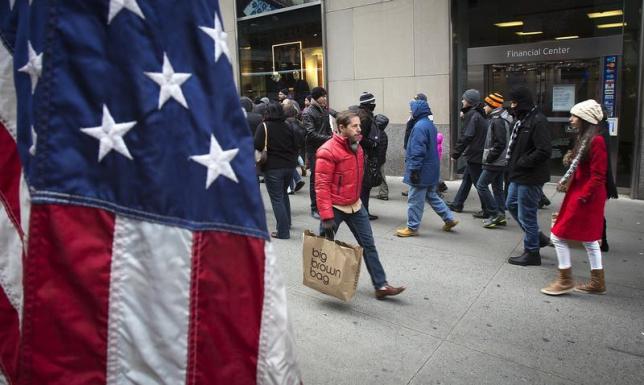 WASHINGTON : U.S. retail sales rose more than expected in October as households bought motor vehicles and a range of other goods, pointing to sustained economic strength that could allow the Federal Reserve to raise interest rates next month.

increased 0.8 percent last month, also boosted by demand for building materials likely as households cleaned up and made repairs in the wake of Hurricane Matthew.

Adding to the report’s bullish tone, September retail sales were revised up to show a 1.0 percent increase instead of the previously reported 0.6 percent rise. The combined September and October sales gain was the largest two-month rise since early 2014. Sales were up 4.3 percent from a year ago.

These so-called core retail sales, which correspond most closely with the consumer spending component of gross domestic product, were previously reported to have risen 0.1 percent in September.

U.S. Treasuries extended losses on the report, while the dollar gained versus a basket of currencies. U.S. stock index futures rose slightly.

September’s upward revision to core retail sales suggests that the economy’s 2.9 percent annualized growth rate in the third quarter could be raised when the government publishes its second estimate later this month.

The retail sales report added to data this month showing a rapidly tightening labor market and signs of a turnaround in the manufacturing sector in underscoring the economy’s strength at the start of the fourth quarter.

It also reinforced views that the Federal Reserve will raise interest rates at its Dec. 13-14 policy meeting. Rate hike prospects have also been boosted by a rally in U.S. stocks in the wake of the last week’s election of Republican candidate Donald Trump as the next president.

The Fed this month left interest rates unchanged but said its monetary policy-setting committee “judges that the case for an increase in the federal funds rate has continued to strengthen.” The U.S. central bank raised its benchmark overnight interest rate last December and has held it steady since, largely because of concerns over low inflation.

Retail sales last month were driven by a 1.1 percent increase in auto sales, which followed a 1.9 percent jump in September. Retail sales also received a boost from receipts at service stations, which advanced 2.2 percent on rising gasoline prices.

restaurants and bars, however, fell 0.7 percent, likely as the stormy weather kept people at home.