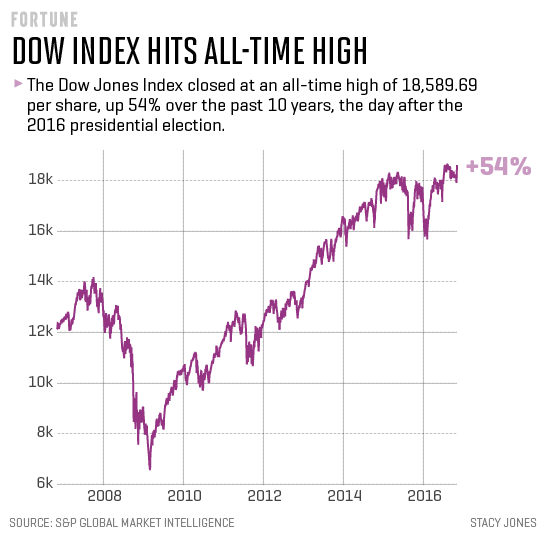 US : The Dow Just Hit an All-Time High

On Tuesday, U.S. markets shook off their fears about Donald Trump and embraced the president-elect.

U.S. stock markets, which fell whenever Trump rose in polls throughout the campaign trail, eked toward all-time highs Thursday. The Dow Jones industrial average soared by more than 250 points to an all-time high while the S&P 500 rallied shortly after markets opened.

The U.S. stock markets were dragged down by losses in the tech sector—an industry that has come under criticism by Trump during his campaign—as investors worried the president-elect may crack down on Silicon Valley. Trump has, after all, promised to scale back free trade agreements—which could hurt companies with highly international production lines, such as tech companies.

The hit to the tech sector can be most clearly seen in the FANG stocks. Facebook slid 2.7%, Netflix fell 5.7%, Amazon dropped 4.6%, while Alphabet shed 2.6% on Thursday alone.

Meanwhile, investors are flocking to financial services in expectation of further fiscal stimulus and higher interest rates under Trump. Shares of Goldman Sachs rose 4.4% to their highest point since July 2015 around noon Thursday, continuing on a two day rally. Troubled banking giant Wells Fargo also rose 6.6% while JPMorgan Chase climbed 3.7%. Bank of America also continued on its two day rally, climbing 4.6%.
Investors are beginning to feel slightly more optimistic about the trajectory of a Trump presidency—at least in the medium term. Trump’s plan to cut taxes for corporations and the wealthy would leave companies and the rich more funds to spend on investments. A study from the Penn Wharton Budget Model in October estimated that Trump’s tax cuts would boost GDP by 1.12% and push jobs up by 11.7 million more than what would have been expected without his plan by 2018. Trump’s plans to increase military and infrastructure spending could also stimulate the economy.

The market rally itself it not unexpected. Markets have traditionally rallied after a presidential election, regardless of the outcome, PNC Chief Investment Strategist Bill Stone wrote in a Wednesday note.

“Looking at data since 1984, markets typically have a one day reaction, either to the slight positive or negative, but tend to go on to positive returns over the next 12 months,” Stone wrote, noting that after President Barack Obama’s victory in 2008, the S&P 500 fell over 5% on the day following his win, before rising 14.9% over the next 12 months.

A more reliable metric than the stock market of what investors expect in the future can be found in the bond market, which continued to surge Thursday. The benchmark 10-year hovered at 2.1%, while the benchmark 30-year yield hit 2.91%, its highest since January, as sign that investors believe the Trump administration will usher in higher inflation and higher interest rates.