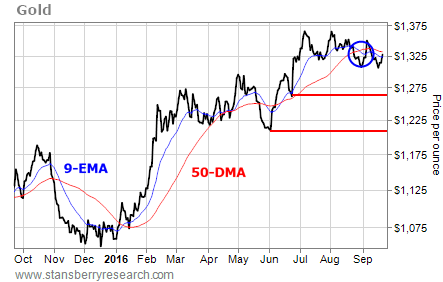 What you should expect from Gold in the short term

The gold rally has stalled out. After jumping almost 30% higher during the first half of this year, the price of the precious metal has gone almost nowhere for the past three months.Gold bulls will argue that this is the sort of pause that refreshes the market. They’ll say that gold’s recent consolidating action is giving it a chance to work off its overbought condition before shooting to the upside once again.

But things don’t look so bullish to me…

That was the largest short position of the past 20 years. And it suggested we’d see at least a pause in gold’s run higher. At the time, gold traded for $ 1,330 per ounce. It’s around the same level today. And the commercial traders are still short more than 300,000 gold futures contracts. The commercial traders remain bearish on gold. It’s usually not a profitable move to bet against the smart money.

Second, the technical setup for gold is bearish today.

Even after gold’s move higher Wednesday following the Federal Reserve’s decision to keep interest rates the same for now, it remains below its 50-DMA.

While gold hasn’t broken down, and the pullback from the highs has been minor, it’s tough to make a bullish argument from this chart. Gold needs to rally above its 50-DMA, and the nine-day EMA needs to cross back over the 50-DMA before the chart will turn bullish.

It looks like gold is more likely to head to one of the lower support lines on the chart. If gold drops toward $ 1,260 per ounce – or perhaps down to $ 1,210 per ounce – we can look to see if the commercial traders have lightened up on their short positions.

Then we might have an argument for adding more exposure to gold.  Right now, though, expect gold to head lower in the short term.