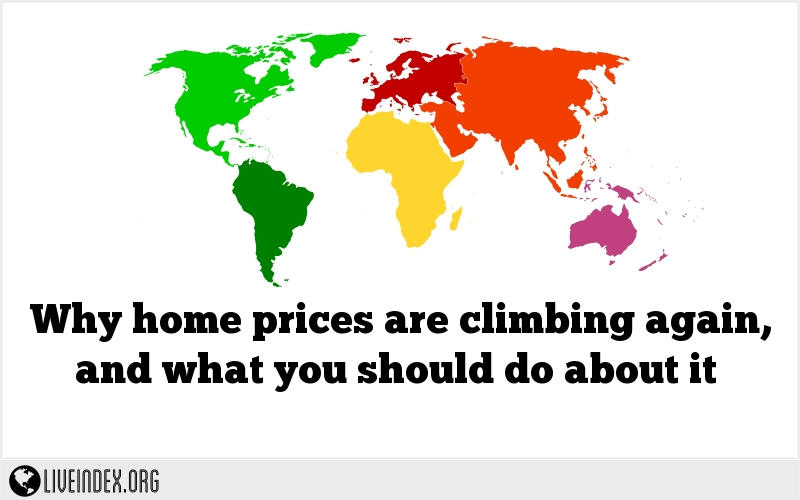 Why home prices are climbing again, and what you should do about it

Chances are home prices in your neighborhood have been rising lately. Strangely enough, that only made the news when, for last November, Standard & Poor’s Case-Shiller index of home prices in 20 top cities fell the grand total of 0.1 percent.

The Federal Reserve tracks a national composite home price index for the country, which looks like this:

Is this good news or bad news to you? That may depend on whether you own your home or not. If not, and you’re saving up to buy, that’s disheartening, as you see your dream slipping out of reach. If you do own, odds are you’re pleased to hear news like this.

Of course, not everyone is sharing equally in this bonanza. Metropolitan centers like New York and San Francisco are experiencing sharper increases, while other locations have more moderate increases or even no increases at all.

Why Are Home Prices Rising?

The glib answer would be something like: “Well, it’s about time the market caught up with itself again!” The reality, though, is there is no such thing as normal home prices. When they go up, some complain, saying that’s inflation, pricing newcomers out of the market. On the other hand, when home prices drop, all hullabaloo breaks loose and it’s the end of the world. You can’t please all the people all the time, as the saying goes. Politicians (and the Federal Reserve) have figured out most people want home prices to rise slowly over time, and that’s what they generally have done in the past.

We all know about the housing bubble which engulfed us as the new millennium started, and its subsequent pop. The chart above shows those two events clearly. We know why the housing market crashed: the explosion of the Wall Street collateralized-mortgage-securities debacle.

But why are home prices rising again? Many reasons have been suggested.

In its attempt to stave off the threat of deflation, the Federal Reserve lowered interest rates to record low levels. Many people point to those low interest rates as an impetus for rising home prices. True?

The data suggests not. Interest rates have been dropping steadily for the past 20 years, and dropped sharply in 2009/10, but the housing market didn’t pick up until 2012. Something else has to account for the rather sharp increase in home prices.

The Great Recession killed a large number of jobs and the resulting unemployment caused many thousands of foreclosures and bankruptcies. Homeowners generally resorted to two alternative housing strategies: move in with relatives or rent. As America went back to work, people earned more money again and were able to afford to buy homes again. The data bears out this explanation:

Despite the dark warnings of a “shadow-inventory overhang” of unsold homes threatening to glut the housing market and keep prices down forever, the reality turned out to be a shortage of inventory of homes for sale.

The inventory of existing homes for sale seems to have returned to pre-bubble levels. Many of us have heard stories of acquaintances who put their homes up for sale and were ecstatic when it sold in a week or two, but then they had a devil of a time finding another home to buy.

The record number of foreclosures, short sales and bankruptcies meant that record numbers of people who prefer to own homes rather than rent were shut out of the mortgage market during the time needed to “rehabilitate.” As those people become eligible to qualify for home mortgages again, they are re-entering the market and adding to the number of buyers … at a time when the inventory of unsold houses shrank and interest rates kept on dropping.

What Should You Do?

As has been pointed out before, the best time to trade up is when home prices are down. It may feel good to know the equity in your home has improved; but that’s not a good time, or reason, to trade up. If you want to trade up, this is the time to save up, so you can pounce when home prices drop in the next recession.

2. Don’t sell before you have another home lined up

If you absolutely have to make a change, keep in mind that your home will probably sell quicker than you expected, and you will have a hard time finding something you like. Therefore, your best bet will be to line up the place you want to buy first.

3. Pre-qualify if at all possible

One of the outcomes of the housing bubble is what seems to be a doubling of the paperwork and hassle of getting a home loan. Several friends have told us recently of the ordeal — one took three months to get their home loan lined up, and this with help from the builder.

4. Don’t pay any attention to any of this if you don’t absolutely have to move

When you hear how the value of your home is going up, there’s a psychology that takes hold. It feels good to hear the value of something you own is going up. (Same with your 401(k) plan value.) It makes you feel rich and proud. But then the reality hits: You can’t eat it, wear it, or drive it (as my friend Pammy loves to say). Isn’t that just the pits? You have this rich feeling, but it doesn’t put any cash in your pocket. In the past, that’s what drove many people to go out and refinance their homes, as happened on a massive scale during the Big Bubble. We all know how that turned out.

The psychological thing is real. The safe response is to be aware of it and then try to ignore it. My wife and I tune out all conversations and media reports about home prices rising. We have no plans to move, and therefore the value of our home is irrelevant (except, of course when the local greedy county assessor uses that to squeeze more property taxes out of us).

The biggest class of consumer debt is home mortgages. As home prices recover, expect more and more junk mail as banks pitch home equity lines of credit or more refinancing to you. That’s what those workers are paid to do. Ignore them. They are looking out for their best interests, not yours.

If, on the other hand, you’ve been sitting on the fence about refinancing, be aware that interest rates have bottomed out. It can only get worse as rates increase in the future.