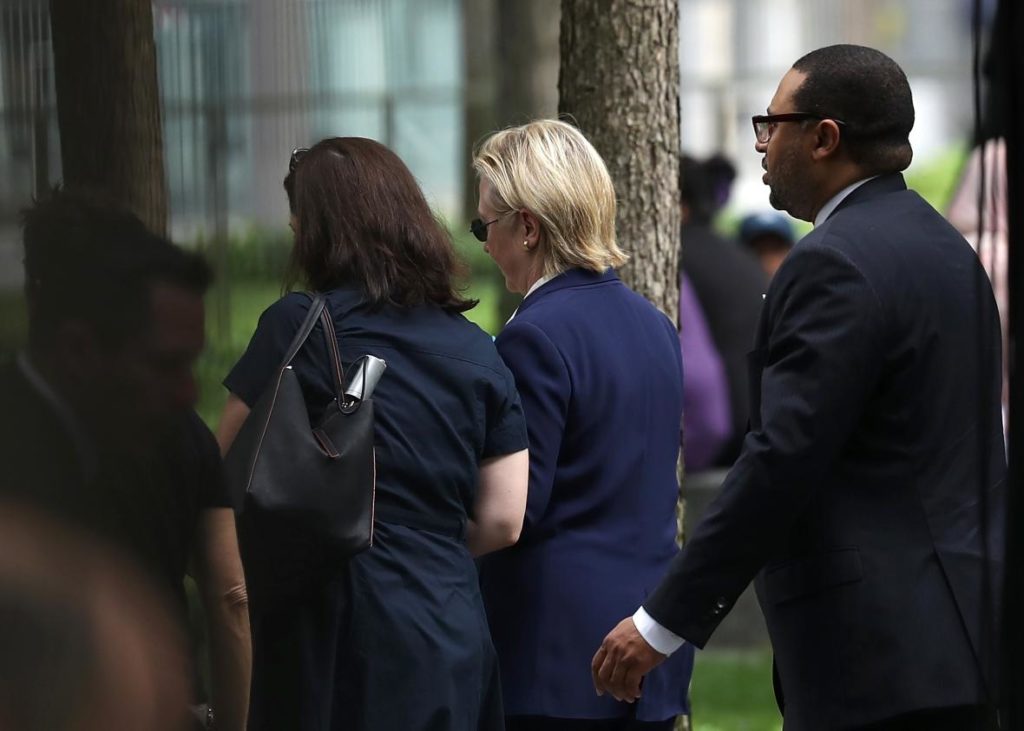 NEW YORK : Democratic presidential candidate Hillary Clinton fell ill on Sunday as she became “overheated” and had to leave early from a September 11 memorial ceremony in New York City.

Clinton, 68, was taken to her daughter Chelsea’s home in Manhattan, and emerged later wearing sunglasses and telling reporters that she was “feeling great,” around two hours after she left the event on a hot and muggy morning.

Video posted to social media showed Clinton as she left the ceremony, standing rigidly but upright while an aide holds her arm. As a motorcade vehicle approached, Clinton wearing the same clothing as at the televised memorial, swayed and her knees buckled. She was helped into the van.

The incident comes less than 60 days before the November 8 presidential election and at a time of intense campaigning against Republican rival Donald Trump.

Clinton had no more events on her schedule for Sunday and went, as previously planned, to her home in Chappaqua, New York, 30 miles (50 km) north of New York City.

Clinton left the memorial event after about 90 minutes while it was still underway, Nick Merrill, a Clinton spokesman, said.

“During the ceremony, she felt overheated so departed to go to her daughter’s apartment, and is feeling much better,” Merrill said in a statement.

As the solemn event began on Sunday at the site of the World Trade Center that was attacked by two hijacked airliners 15 years ago, there was patchy sunlight, with temperatures at about 80 degrees Fahrenheit (26.6 Celsius). But the high humidity caused it to feel much hotter in the crowd at times.

Democratic Representative Joe Crowley of New York, a Clinton supporter who attended the event, told Reuters that it was “incredibly, stiflingly hot” during the ceremony.

After some U.S. media reported she had fallen ill, reporters traveling with the candidate did not get an immediate response from the campaign to questions about her whereabouts and her health. About 90 minutes elapsed before the campaign issued its statement.

Trump has repeatedly raised questions about Clinton’s health and whether she had the “stamina” to serve as president.

In December 2012, Clinton suffered a concussion and shortly afterward developed a blood clot.

In a letter released by her doctor in July 2015, Clinton was described as being in “excellent health” and “fit to serve” in the White House. It noted that her current medical conditions include hyperthyroidism and seasonal pollen allergies.

However brief her illness was, it comes in the wake of some tough days for Clinton, as national polls showed her lead over Trump diminishing. A Reuters/Ipsos poll of likely voters showed an 8-point lead for Clinton had vanished by the last week of August.

On Saturday, Clinton came under fire from Republicans and on social media for saying Friday night that “half” of Trump’s supporters belonged in a “basket of deplorables.” She later said she regretted using the word “half.”

Clinton’s speech at a campaign rally earlier this month in Cleveland was interrupted by a coughing spell. During the speech, she quipped, “Every time I think about Trump I get allergic.” She then resumed her speech.

That episode fueled speculation from conservative political quarters about her health. Trump supporters have been tweeting unsubstantiated theories regarding Clinton’s health under the hashtag #HillarysHealth.

Trump, 70, has also been under pressure to release detailed information on his health and medical history.

Instead, in December, Trump’s doctor wrote in a short letter that was made public that his blood pressure and laboratory results “were astonishingly excellent” and that he would be “the healthiest individual ever elected to the presidency.”

Since then, the doctor has told NBC News that he wrote the letter in about five minutes, saying he was “rushed” and “anxious” as a limousine was awaiting him.