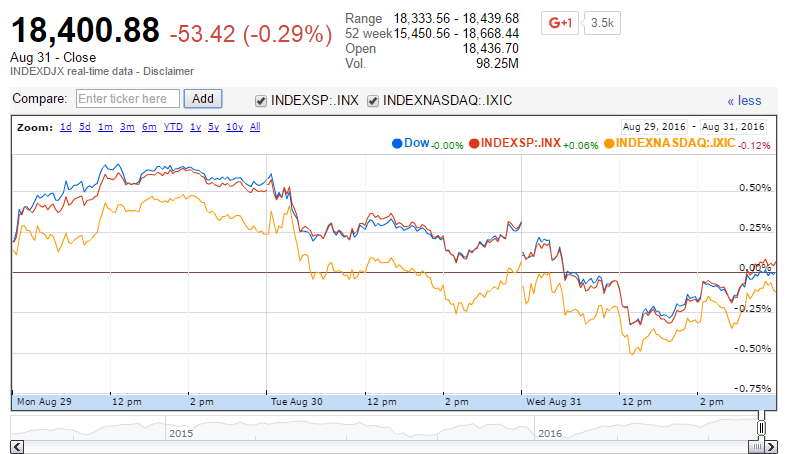 Reports on the economic calendar Wednesday included MBA Mortgage Applications, the ADP Employment Report, the Chicago PMI, Pending Home Sales, the EIA Petroleum Status Report and August Farm Prices. MBA Mortgage Applications were slightly higher as borrowers likely took advantage of the still low rates. Mortgage applications increased 2.8 percent for the week while refinancing applications increased 4 percent. The ADP Employment report showed an increase of 177,000 payrolls in the private sector. The Chicago PMI was lower at 51.5 down from 55.8. Pending Home Sales increased 1.3 percent from the previous month. The EIA Petroleum Status Report showed an increase of 2.3 million barrels for the week and oil prices were lower. The August Farm Prices report showed agriculture prices down 1.4 percent for the month and 11 percent for the year.

Valuations were lower Wednesday as investors primarily watched the ADP Employment report which showed private sector hiring increasing above expectations at 177,000. While a good thing for the economy, the employment data signaled that the Fed would likely be more aggressive on its timing for interest rate increases which has been slowing momentum in equities.

For the day stocks trading actively included the following: