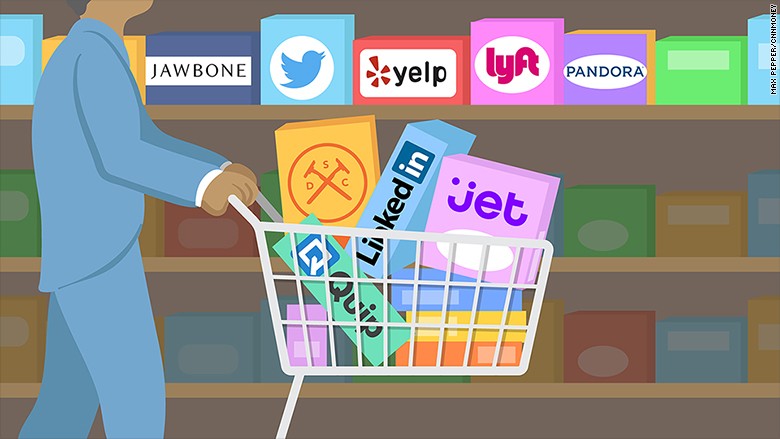 Why Google, Microsoft and Walmart are gobbling up tech companies

Big businesses have finally learned to stop worrying and love buying tech companies again.  Microsoft, Apple, Intel  and Salesforce have joined the likes of Walmart and Unilever in ponying up hundreds of millions — or even billions — to buy technology companies in recent months in what can only be described as a feeding frenzy.

The list of names scooped up by these buyers reads like a who’s who of high-profile Internet services: LinkedIn, Yahoo, Dollar Shave Club, Jet.com. Others like Twitter, Pandora and Lyft are said to be acquisition targets too.

The spree comes as public companies such as LinkedIn and Twitter get hammered for failing to meet Wall Street’s demands for growth, and startups face a volatile market for going public with increased pressure from investors to be profitable.

All of the sudden, some public and private tech companies are more interested in ditching Wall Street for the lucrative embrace of a bigger company. And the big companies, once skittish about sky high valuations in tech, are now all too happy to swoop in.

“2016 will go down as the year of the lack of the tech IPO and a market of incredibly robust M&A activity,” says Daniel O’Keefe, general partner at Technology Crossover Ventures, an investor in Dollar Shave Club, which sold to Unilever for close to $ 1 billion.

Not a single tech company went public in the first quarter of 2016 and just nine have had IPOs so far this year, according to data from Renaissance Capital.

Mergers and acquisitions, on the other hand, are soaring. Deals to buy private tech companies have totaled $ 318 billion for the year so far, significantly outpacing the $ 250 billion spent on tech M&A through the first three full quarters of 2015, according to data from PitchBook.

And according to O’Keefe, “I don’t think we’re done yet.”

Venture capitalists and analysts point to a combination of factors setting the stage for more acquisitions: deflated valuations at certain private and public tech companies; low interest rates that make borrowing to finance deals easier; and corporations with loads of cash on hand.

“You’ve got a lot of the large tech companies that have been doing well. They have a lot of cash and they have a lot of shareholder pressure to do something with that cash,” says James Gellert, CEO of Rapid Ratings, an independent research firm.

At the same time, the pool of potential buyers increasingly includes tech and non-tech companies whose interests converge in areas like online shopping and self-driving cars.

Some of the biggest startup acquisitions of the year came from outside traditional tech companies: General Motors spent a reported $ 1 billion buying Cruise Automation for autonomous vehicles; Unilever spent about as much on Dollar Shave Club; and Walmart agreed to buy shopping site Jet.com for $ 3.3 billion.

“You have gone through an environment where neither side was buying. Now both the technology companies and the industrial companies are competing for assets,” says Harry Weller, a partner at New Enterprise Associates, one of the largest investors in Jet.

That, Weller says, should only continue as more and more companies look to tap into technologies like artificial intelligence, cloud computing and robotics.

Two years ago, some of these same companies might have refused to sell, or simply been too pricey for buyers to justify, thanks to a flood of private capital pouring into startups at high valuations from VCs and mutual funds.

“I think we can all say with certainty that it was a robust pricing environment,” says O’Keefe. “I sensed corporates pulling back a bit in that environment.”

Fast forward two years — through a turbulent global market, a clogged IPO pipeline and prominent companies like Square forced to go public at lower valuations — and startups finally start to lower their expectations for how much they’re worth.

As Jeff Epstein, a partner at Bessemer Venture Partners, an early investor in LinkedIn, puts it, “Sometimes it takes two or three years for people to psychologically adjust to the new pricing levels.”