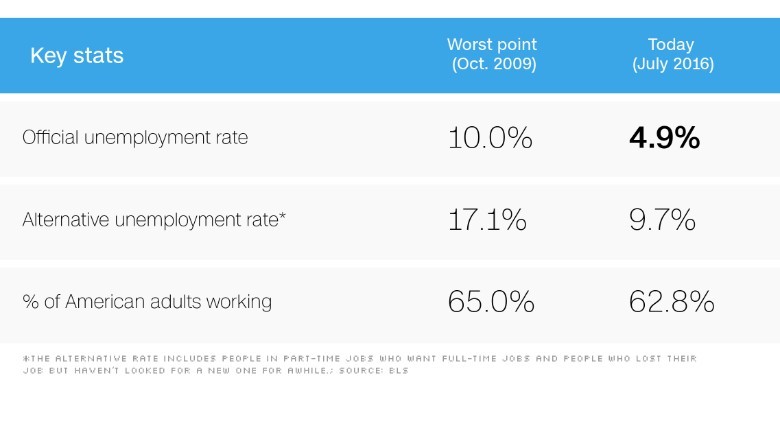 Give Donald Trump credit for being consistent.  A year ago he called America’s 5% unemployment rate a “joke.” Now he calls it a “hoax.”

“The 5% figure is one of the biggest hoaxes in American modern politics,” Trump proclaimed Monday in a big speech on the economy.On this one, he’s just plain wrong — “pants on fire” wrong to use the terminology of the PolitiFact.com Truth-O-Meter.

First of all, the official U.S. unemployment rate is currently 4.9%.

Second, the formula for calculating the unemployment rate has been the same for years. The nerds at the Bureau of Labor Statistics handle the process and are fully transparent about their methodology. The president doesn’t get to tinker with the calculator.

“It’s unacceptable to suggest that somehow the Bureau of Labor Statistics is cooking the books,” says Doug Holtz-Eakin, a former director of the Congressional Budget Office and economic advisor to John McCain.

“I worked with hundreds of people [at BLS]. I could not tell you the political affiliation of anyone,” says Kathleen Utgoff, who was head of the BLS for most of President George W. Bush’s term.

Utgoff says most people at the BLS work there for their entire lives. The staff take pride in the statistics they produce. The motto at the BLS is “accurate, timely, unbiased” data.

Trump is hardly the first to hate on the BLS. Many presidents have been irate at the agency because they wished the unemployment rate and jobs data were rosier. President Richard Nixon famously said, “Are they all Jews over there?”

The BLS isn’t cooking the books. Trump is wrong to suggest there’s some sort of conspiracy and that the “real unemployment rate” is 42%, as he’s said in the past, or even “20 or 21%” as he said Thursday.

There will always be debate about the best way to calculate any statistic. Unemployment is no different. That’s why the BLS also publishes “alternative” measures of unemployment each month.

Bernie Sanders loved to point to the alternative rate, which is currently 9.7%. It’s higher because it includes the unemployed plus people in part-time jobs who want full-time jobs plus people who are out of work and haven’t searched for a job for awhile.

The BLS isn’t trying to hide or tinker with the numbers. It presents many different metrics so the public, and politicians, can see them and debate what to do.

If there’s a half-truth to what Trump is saying, it’s this: There’s no doubt that the jobs situation has improved substantially since the Great Recession when unemployment peaked at 10%. But the reason 4.9% unemployment doesn’t feel so great is because the labor force participation is at its lowest point since the 1970s.

Many experts have examined the reasons behind this drop. The consensus is that much of the decline was inevitable as Baby Boomers retire and more young Americans stay in school longer to get college and graduate degrees. Trump doesn’t like to talk about that.

That said, about 25% of the decline in labor force participation isn’t explained by demographics or the usual economic cycle effects, according to a White House Council of Economic Advisors report. To put that another way, about 2 million Americans fall into that unexplained category.

In the past, these people would likely have been working. Now, they’re not. Maybe they’ve became discouraged after not being able to find a job, or they didn’t feel the job opportunities out there were good enough for them. It’s also possible some are traveling the world or staying home because they want to.

It doesn’t mean unemployment rate is wrong. It’s one metric to look at jobs. The BLS is also the organization that calculates the labor force participation rate (as well as various “alternative unemployment rates” that Sanders likes to reference).

The reality is the unemployment rate is based off a survey of 60,000 Americans households. More than 1,000 surveyors from the Census Bureau conduct the interviews. There are regular “spot checks” of the interviews to ensure no one is monkeying around.

No one at the White House or elsewhere in the administration gets to see the unemployment and jobs data until shortly before the number is released to the public. By then, the numbers are set. Even the press release is already written.