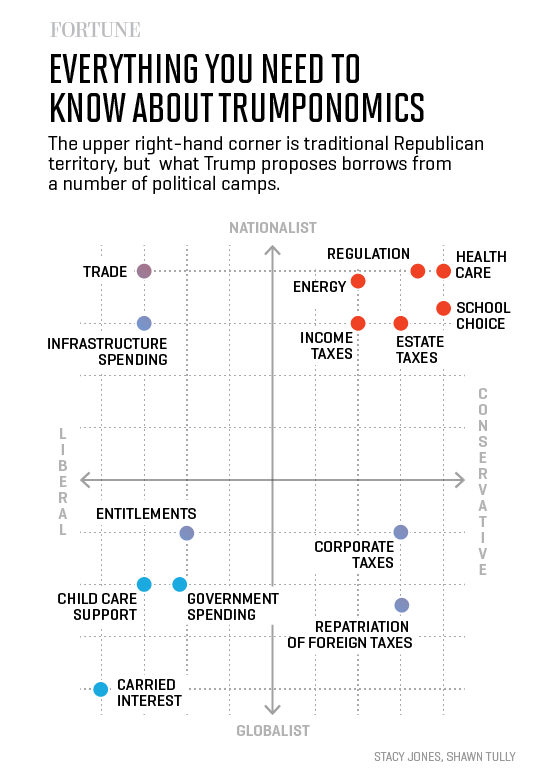 US : All you need to Know about ‘Trumponomics’ in one Chart

But how? And what is it exactly?

Every president and presidential candidate has had their own slightly different version of how they would run the economy. That’s true for Trump as well, even if his version seems more different than most.

In a big economic speech in early August, Donald Trump outlined the economic policies he would push as president. Many didn’t mesh with what we think of as a traditional Republican candidate, or Democratic candidate one for that matter. For instance, Trump has said he would spend nearly have a trillion dollars on infrastructure, something right out of the New Deal, but that he also plans to cut taxes in a way that would have made Reagan proud.

So is Trump really an economic maverick with no guiding philosophy? To better grasp where Trump stands, Fortune charted his positions on fourteen major issues on a political matrix. They’re all placed according to their standing on two scales: Nationalist vs Globalist and Liberal vs Conservative.This map reveals the two main features of Trumponomics. First, he does hold several positions that are far more liberal than most mainstream Republicans. He favors tax breaks for families with children, promises no cuts to Medicare and Social Security, and his proposal to raise expenditures for defense and veterans would swell the federal budget. He’s also defying Wall Street by seeking higher levies on “carried interest” income for hedge fund and private equity managers, and his infrastructure expansion plan is bigger than Hillary Clinton’s. And on trade, Trump is a pure, America-first populist, rating at the extreme end of the Nationalist axis, echoing views of the Democratic-leaning unions advocating protectionism.

Second, the Matrix shows that he’s actually a lot more consistent with traditional Republicans than you might think from listening to scattershot policies unfurled from the podium. No fewer than six of the fourteen positions are solidly conservative, including his proposed moratorium on new regulations, support of school choice, and promised push for higher oil and gas production.

On the tax front, Trump falls solidly in the Republican camp, advocating more than halving the top corporate rate to keep manufacturers from fleeing the U.S. Another boon to big business is his pledge of allowing repatriation of earnings parked abroad at low rates. The estate tax would vanish, and income taxes would be simplified to three brackets, with a top rate of 33%, far below the current limit of 39.5%. In fact, Trump reworked his previous proposal to match that of the House Republicans.

Donald Trump does plenty to freak out Republicans, practically on a daily basis. But on economics, his reputation as a rebel is somewhat exaggerated. His platform is dominated by evergreen proposals that have been pillars of the GOP for years. Trumponomics, if not Trump himself, should provide some comfort to loyal Republicans, and anyone who thinks the GOP’s candidate is just too unpredictable to be president.