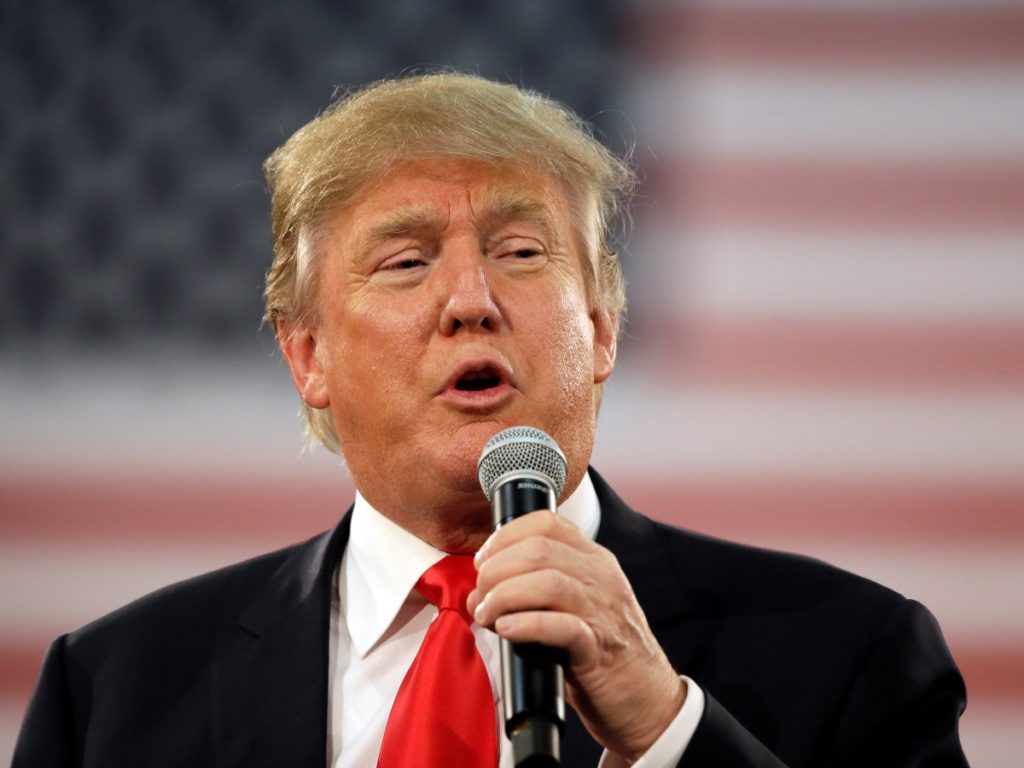 The New York businessman used a speech on the economy in Detroit to try to turn the page after a week of missteps in which he came under heavy criticism, including from some in his own party, and rival Democrat Hillary Clinton surged ahead in opinion polls three months ahead of the Nov. 8 election.

“I want to jump-start America,” Trump said, “and it won’t even be that hard.”

Trump stuck to prepared remarks rather than the freewheeling style that often produces controversial comments at rallies. He kept his cool as some 14 protesters jumped to their feet and shouted at coordinated intervals as he spoke at the Detroit Economic Club.

Trump’s remarks, which were repeatedly cheered by the crowd, appeared targeted at both an affluent business community and working people, in particular those who have suffered from a decline in U.S. manufacturing in cities such as Detroit. He dismissed Clinton as representing “the tired voices of the past.”

Much of the speech reflected Republican talking points and critics said his proposals lacked detail. But Republican operatives and others who saw the speech praised Trump for turning his focus to policy and contrasting his ideas with Clinton’s.

The question for Trump now is whether he will be able to keep his campaign on message as Republicans want him to do.

Trump’s plan to create new tax deductions for childcare costs raised questions from economists about whether lower-income families would benefit. Many Republicans remain frustrated with his trade vision, which bucks party orthodoxy by calling for a rewrite of major agreements.

“My response is good, bad and ugly,” said Lanhee Chen, who was policy director for the 2012 presidential campaign of Republican Mitt Romney.

“I think the trade position remains pretty ugly,” he said. “But I understand why they did it. I think it’s a strong effort, at least, to meld elements of conservative economic policy with Trump’s more populist thinking.”

Trump’s effort to shift focus came after what was widely seen as the worst week of his campaign, in which he sparred with party leaders and got entangled in a dispute with the parents of a Muslim U.S. soldier who was killed in the Iraq war.

Republican Senator Susan Collins added her name on Monday to a growing list of Republican lawmakers who say they will not vote for Trump.

On Monday, Trump waited for the frequent disruptions by protesters to end, smiling and refraining from his practice at campaign rallies of asking security to “get them out of here.”

A group called the Michigan People’s Campaign took credit for the protests, which they said were aimed at Trump’s recent comments about sexual harassment.

Clinton will outline her economic vision in Michigan on Thursday. In a statement issued before Trump’s speech, her campaign said his plan would give tax breaks to the wealthy and big companies and would hurt working families.

At a rally on Monday in St. Petersburg, Florida, she derided a list of economic advisers Trump released last week as “six guys named Steve.”

Trump, a real estate developer who has never held elected public office, touts his practical experience and potential to create jobs, blaming President Barack Obama for what he calls a weak recovery from the economic recession. On Monday, he said Clinton would rely on policies that have not worked.

“She is the candidate of the past,” Trump said. “Ours is the campaign of the future.”

Reaction from the crowd in Detroit was mixed.

“I think he laid out a good bullet point on how he’s going to solve the economic problems with his trade policies,” said insurance executive Sal Giammursta.

Trump called for a temporary moratorium on new regulations and repeated his pledges to rewrite the landmark North American trade deal that President Bill Clinton, Hillary Clinton’s husband, signed in 1994, and to withdraw from the 12-nation Trans-Pacific Partnership deal backed by Obama.

But much of the reaction was to Trump’s tax plan. He again proposed lowering the corporate tax rate to 15 percent from the current 35 percent. And he proposed lowering income-based individual tax brackets to 12 percent, 25 percent and 33 percent.

In 2015, Trump proposed a lower top rate of 25 percent. After criticism from budget experts who said such low rates would balloon deficits, he tweaked his proposal to be more in line with policies supported by Republicans in Congress.

“It’s encouraging that Donald Trump appears to be modifying his tax plan,” said Maya MacGuineas, president of the anti-debt Committee for a Responsible Federal Budget.

Steve Moore, an adviser to Trump, said the campaign believes it has made changes to bring the plan’s cost down to $ 2 trillion to $ 3 trillion. A campaign aide said Trump would give more detail in a later speech.