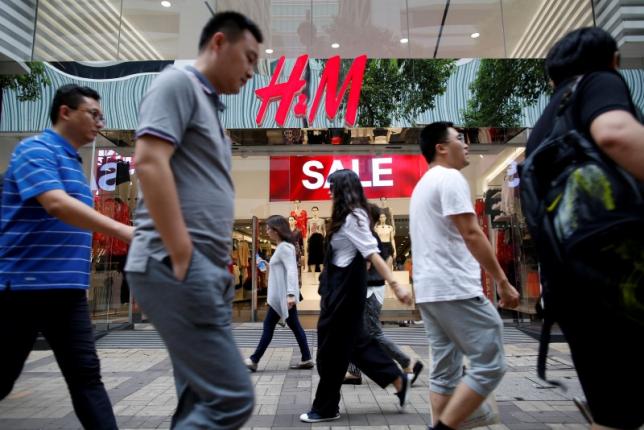 Weak sales of luxury goods drove Hong Kong to report 15th straight monthly drop in retail sales, and the city is set to post another drop later on Tuesday when it releases June data.

Luxury retail in Hong Kong exploded over the past decade as increasingly wealthy mainland Chinese flocked to the city to buy high-end Western brands, pushing out the local jewellers and other shops that once dominated the high street.

“Back in the day we only used to see (jewellers) Chow Tai Fook, Luk Fook, and pharmacies,” said Cynthia Ng, director of retail services of Colliers International.

“They (new retailers) are not necessarily local brands but tend to be cheaper in pricing and younger… Not only does the adjusted rental fit their budget, but at the same time the craze and the demand for fitness and sports are also helping them.”

“The luxury sector usually has much more value added,” Lai said. “So these guys may not be able to do exactly the same in terms of delivering value.”

Retail rents in Hong Kong’s core shopping districts, still among the world’s highest, are likely to fall another 5-8 percent in the second half of this year, bringing the full-year correction to 10-15 percent, according to CBRE.

Those declines are attracting new tenants to shops large and small.

“For us best location is always key, and when opportunities arise, we look at the possibilities for opening new stores,” a spokesman for H&M in Stockholm said.

Sports brand Adidas last year leased a 13,000-square foot shop in the city for 22 percent less than its former occupier, Coach Inc, as the U.S. premier brand closed its four-storey flagship store in Central amid weak retail sentiment and a drop-off in tourist arrivals from mainland China.

Swire Properties’ Pacific Place, where British fashion house Burberry will halve the size of its store by 2017, is reshuffling its tenant mix, bringing in more food and beverage stores.

Lifestyle store Homeless recently opened a store in CityPlaza shopping mall after years of effort to secure a place in prime shopping district, and is planning to relocate its shop in Tsim Sha Tsui this year to a location with much better traffic.

“In the second half of May, many brands had kicked off their summer sales much earlier than before and offering much higher discount than they normally did,” Thomson Cheng, chairman of Hong Kong Retail Management Association.

“It failed to significantly boost sales. The situation is worrying.”

In early June, French fashion house Chanel slashed prices by as much as 70 percent on selected items, while Coach cut some prices by half, in line with moves by Burberry and French luxury group Kering’s Gucci.

“The spending pattern of mainland tourists had changed and their consumption power is weakening,” Cheng said, forecasting a double digit decline in June retail sales.