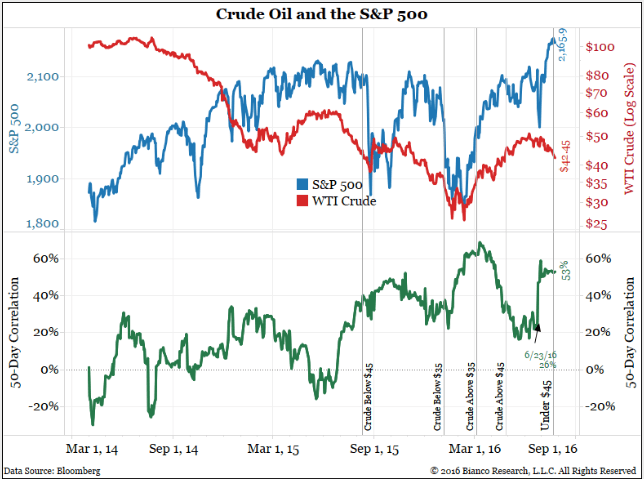 Don’t look now, but the price of oil is falling yet again.

On Tuesday, the price of U.S. crude oil hit $ 42.41 a barrel, the lowest level since April and a more than 15% decline from its 2016 high reached last month. The reason? Oil producers have taken the rise in prices during 2016 as an excuse to ramp up production again, with oil rig counts rising again of late, and overall U.S. production rising last week for the third in a row.

It was a similar rig-count recovery last year that helped kill a rally in oil prices and sent them below $ 30 per barrel during the nadir of the market earlier this year. But the signs of weakness in the oil market may not just be causing headaches for commodity traders, according to analysis by Jim Bianco of Bianco Research. He argues that the price of oil is nearing a critical point that will start negatively affecting stock prices as well.

As you can see from the chart above, oil and stock prices were pretty heavily correlated during the early part of 2016, but otherwise are not.Bianco says that it’s all about credit risk. “Oil prices below $ 35 lead to concerns of a credit event in the energy patch impairing banks and the overall market,” Bianco writes in a note to clients. “In these times the correlation between stocks and oil is high.” Once oil hits $ 40 per barrel, these credit fears begin to subside, and seem to evaporate completely at the $ 45 level.

Of course, cheap oil isn’t all or even mostly a bad thing. While the United States economy is more reliant on oil production today than a decade ago, as a result of the shale revolution, most Americans relationship to oil is a transportation expense. The JPMorgan Institute recently estimated that in 2015 the typical middle income family spent $ 480 less on gasoline in 2015 than in the year previous, of which the spent 58% and saved the rest.

But now that oil is back below that critical $ 45 level, there’s reason for the market to fear a wave of bankruptcies. After all, there have been more than 150 bankruptcies in the oil and gas exploration industry since the beginning of 2015, and traders may fear that if oil continues to fall that these bankruptcies will only continue to mount.