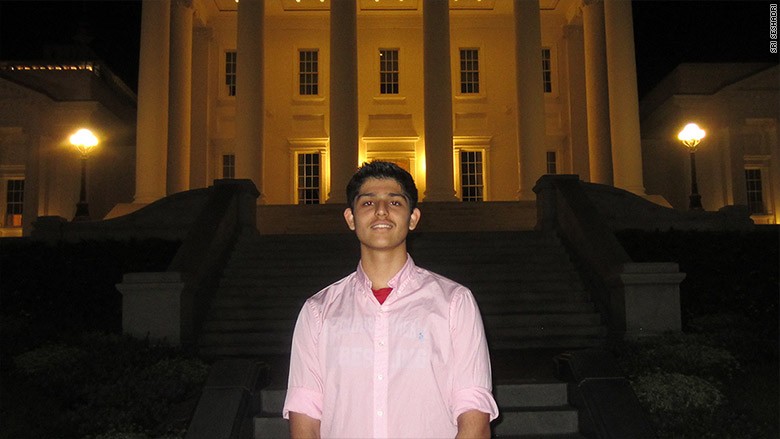 Sudarshan Sridharan may not have been old enough to drive a Tesla, but that didn’t stop him from profiting on the stock.

Unlike most 16-year-olds, Sridharan manages about a quarter of a million dollars of his parents’ retirement money. It might seem like an extremely risky retirement strategy and hardly anyone would advise giving a teenager that much financial control, but Sridharan’s parents leaned on some early success.

The Charlotte, North Carolina high school student’s stock picks have scored more than $ 43,000 in gains since mid-2013. Sridharan’s bet on Tesla (TSLA) alone turned into a $ 17,000 gain, according to financial documents shared by the family. That’s on top of $ 14,600 in winnings off Google (GOOGL, Tech30) stock and $ 5,600 on Netflix (NFLX, Tech30). All the trades were conducted in an investment account in his parents’ name.

Sridharan’s fascination with the stock market started when he was in elementary school and he followed the Great Recession on the radio with his dad.

“My dad told me to listen to Marketplace on NPR. And he brought investing books home for me. That’s how I got interested,” Sridharan said.

By the time Sridharan was 12, he started seriously pitching his parents on his stock ideas. They were understandably reluctant about letting him invest. But he didn’t take no for an answer and created PowerPoint presentations to sell his stock picks to his parents. Eventually, after his virtual picks proved to be a success and a lot more prodding, they gave him a shot.

“In the beginning, it was really scary,” said Sridharan Seshadri, Sudarshan’s father.

Acknowledging the drawbacks to the strategy, Seshadri explained that he always executed the trades himself and put in stop-loss limits to minimize potential losses on his son’s trades.

But soon enough, the parents were so convinced of his stock-picking skills that they sold a townhouse they owned to free up more cash to deposit into the Wells Fargo brokerage account their son was managing. Now he’s in charge of investing most of their cash savings.

The family provided CNNMoney with 1099 tax forms and annual performance documents from Wells Fargo confirming the investment gains. Seshadri also confirmed that his son was the only one who made investing decisions on this account.

Before buying any stock, Sridharan asks himself two key questions: “Will it be around in 10 years? Is this something that people need?”

That explains his purchase of Microsoft (MSFT, Tech30), Adobe (ADBE) and Google stocks. “Those are three stocks that if they went down, the Internet would just be in chaos,” said Sridharan, who plans to start an investing club at his high school next year.

Of course, Sridharan owes a certain amount of his success to the bull market, which has lifted many stocks to uncharted territories.

On average, Sridharan’s portfolio has owned between 2-10 stocks. He did manage to beat the broader market a few times. For instance, his Wells Fargo account returned 42% in 2014, nearly quadrupling the S&P 500’s gain of 11% that year. Likewise, Sridharan was up nearly 30% last year even though the U.S. stock market flatlined.

Despite these successes, a retirement portfolio made up of just a handful of stocks isn’t a strategy that’s recommended by experts. When things get ugly in the markets, such a portfolio will definitely lose its charm.

And like other investors, Sridharan has struggled this year, admitting he’s been “caught up in a few bad trades.” At one point early this year, when the stock market was in chaos, Sridharan was down nearly $ 20,000 on Visa (V) and Nike (NKE) alone.

The stock market is hardly the only thing Sridharan is focused on – he plays basketball, which suits his six-foot, four-inch frame.

“I credit my mom with providing me with a diverse array of experiences,” he said.

And like other teenagers, Sridharan enjoys video games, though he’s trying to find a way to profit off of that interest too. He owns an eSports team, in the hope it will take off amid the wave of popularity for video game competitions.

Early on in his investing venture, Sridharan dreamed of becoming a hedge fund manager after finishing college. While he still thinks he may head into a career in finance and trade stocks, he worries it might be too stressful. He’s more interested in launching start-ups and doesn’t want to obsess over money.

“I’ve realized that money isn’t everything. It’s just a tool to let you get from Point A to Point B,” Sridharan said.