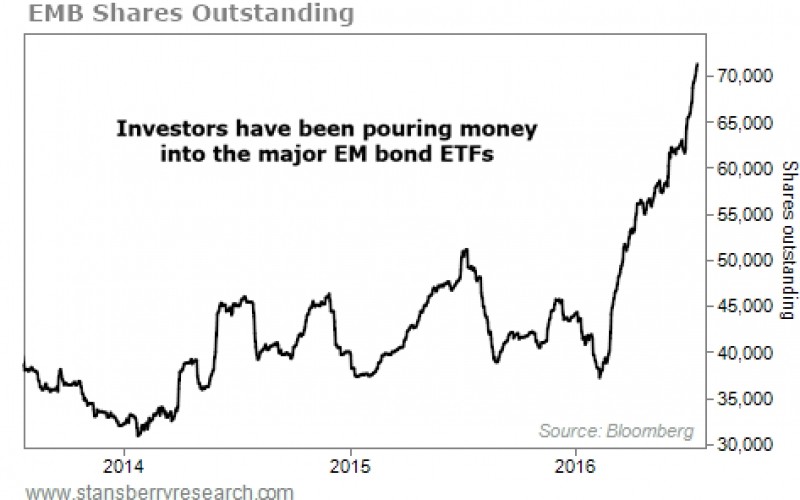 You Really NEED To Avoid This Investment…

Remember when EVERYONE was getting into real estate a decade ago?

How many times did you hear “you can’t go wrong in real estate” back then? House prices were going up faster than I’d ever seen.

And remember what happened next?

Prices crashed… worse than they had in generations.

Today, we’re seeing a similar setup – which could lead to a similar outcome – in another asset class. You must avoid this asset class right now.

Investors are desperate for income, or “yield.”

You earn close to zero percent in the bank. And 1.5% on 10-year government bonds. Corporate bonds pay you barely more than 3%.

None of that is enough to live on. So desperate investors are looking elsewhere to find a higher yield… Right now, they’re finding it in emerging market bond exchange-traded funds (ETFs).

“Investors are piling into emerging market bond funds at the fastest pace on record,” the Financial Times reported yesterday.

An individual investor might not realize it – but by buying these funds, he’s risking his life’s earnings on the governments of Brazil and Russia, among others.

The benefit is dubious… The largest emerging market bond ETF pays less than 5% interest. Five percent! Meanwhile, the price of this ETF could easily fall 5% in less than a week – wiping out a whole year’s worth of interest.

“Especially eye-catching are recent flows into exchange-traded funds,” theFinancial Times continued. “Emerging market fixed-income ETFs have seen inflows of $ 8.3 billion this year, more than two and a half times the amount at the same time last year.”

To be clear, huge inflows into an investment don’t mean that the good times will end immediately… Rather, huge fund inflows are a sign that a big move isnearing its end… just like we saw in the U.S. housing market in 2006.

Emerging market bond funds have seen record inflows. That’s enough for me to know that there’s likely not much upside in this trade.


Don’t get tempted by the yields these funds offer… The pain these funds will eventually deliver will be a lot greater than the benefit of the tiny bit of extra income you can earn from them today.