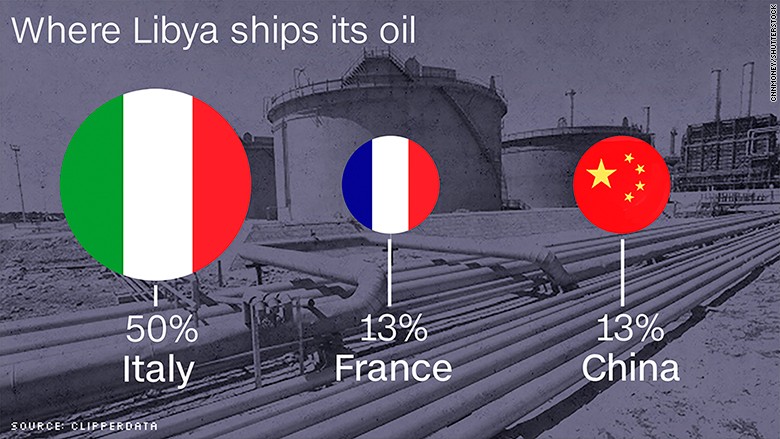 One of the biggest mysteries in the oil market resides in the war-torn nation of Libya.

A long civil war and the rise of ISIS have limited Libya’s oil production to just a fraction of what it was in 2010, before the uprising that ousted and ultimately killed the country’s longtime dictator Moammar Gadhafi.

Libya, a large global oil producer, appeared to reach a breakthrough earlier this month when rival governments in the east and west agreed to merge their competing oil companies. The agreement was hailed as a positive step and some even predicted Libya could quickly double its oil production, flooding the oversaturated market with tons of high-quality crude.But serious obstacles to Libya’s oil comeback loom, especially security challenges, political infighting and decay of the OPEC nation’s energy infrastructure. Despite Libya’s enormous potential, analysts remain skeptical about when it will get back on its feet.

“Libya has the ability and the resources. It just doesn’t have the cohesion or stability,” said Matt Smith, director of commodity research at ClipperData, which tracks crude shipments.

“We’ve been at this point so many times before and it hasn’t come to fruition. Now it’s like the boy who cried wolf,” he said.

Rewind to 2010, before the Arab Spring revolutions that rocked the Middle East — and the oil markets. Libya pumped 1.6 million barrels per day in June 2010, according to the International Energy Agency. That’s not a far cry from what reliable OPEC member Kuwait was churning out.

A year later, Libya’s oil production crashed to just 80,000 barrels a day amid the chaos in the region. Things in Libya seemed to stabilize in 2012 and 2013, with daily output returning north of 1 million barrels, but that proved unsustainable due to the civil war that tore the country apart. Libya pumped just 310,000 barrels a day last month, a fifth of its 2010 pace. 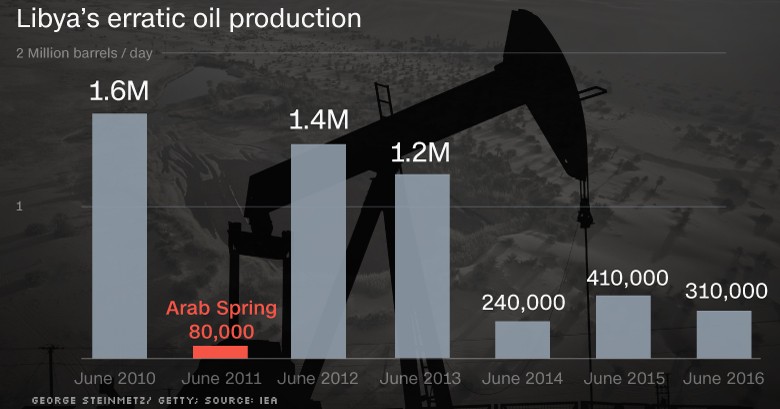 Clearly, Libya has room to improve. A meaningful return of Libyan crude could deal a blow to the fragile oil market, which most believe remains oversupplied despite recent improvements. Oil prices touched $ 43.69 a barrel on Wednesday, their lowest level in more than two months.

Libya could enter the ongoing OPEC price war with an advantage because its high-quality oil is easily refined and turned into products like gasoline. “They call it the champagne of crude oil. It’s this really high quality stuff,” said Smith.

But JBC Energy warned in a recent report that a “rapid” production pick-up in Libya this summer is “unlikely” and production could stay near current levels over the coming months. Thomas O’Donnell, a senior energy analyst at Wikistrat, agrees there “is not a lot to be optimistic about.”

Here’s why oil watchers are skeptical:

Damaged infrastructure: Libya’s oil facilities suffered heavy damage from years of violence caused by the civil war and sabotage by terrorists. Expensive repairs are needed. Reports indicate oilfield guards and other workers in Libya are on strike due to unpaid wages.

Political challenges: Even though Libya has made progress, political minefields loom that could trip up a consistent increase in production. Those challenges may also spook potential investors.

ISIS: Security risks also haven’t gone away. “Despite the recent battlefield defeats around Sirte, Islamic State remains a threat to output,” Helima Croft, a former CIA analyst who is currently head of commodity research at RBC Capital Markets, wrote in a report.