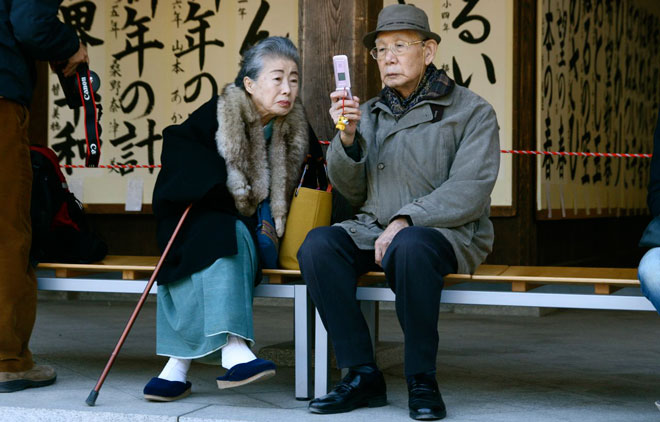 Japan : Why elderly are turning to riskier DIY pension

Japan’s government loosened laws on pensions in May, allowing almost all working-age Japanese to join private defined-contribution retirement plans – similar to individual retirement accounts (IRAs) in the United States that allow workers to make regular contributions to an investment fund with tax breaks.

When Saori Ito went on maternity leave last year and stopped getting a regular paycheck from her cosmetics company, she became worried about her future – and wondered if this kind of anxiety is what awaits her after retirement.

The 34-year-old married mother of a one-year-old girl had doubts about the government’s ability to fund retirement for Japan’s growing ranks of elderly in the world’s oldest population.

So she set up a private, self-managed pension account.

“How I see it is that the government won’t be able to pay that much in pensions anymore, so it’s telling us, ‘Go take care of it yourself. We can’t do it for you,’” Ito told Reuters at a Tokyo cafe.

Despite the Bank of Japan’s decision in January to slash interest rates below zero to boost investment, more than half of the $ 16 trillion in Japanese household assets are still either in bank deposits or cash, compared with 13.8% for the United States.

It’s already proven something of a hit with the public. Since the law reform passed parliament in May, monthly web access to the 401k Educational Society, a non-profit that promotes defined-contribution pension plans, has surged seven-fold to 42,000, said Kayo Oe, the group’s chief researcher.

The change has the potential to attract as many as 9.4 million new users over time from 257,000 now, and generate an annual capital flow of up to 1 trillion yen ($ 9.46 billion) into the private-pension sector, according to Nomura Research Institute (NRI).

Financial institutions such as Nomura Securities Co , SBI Securities Co, the Bank of Tokyo-Mitsubishi UFJ, and Sumitomo Mitsui Banking Corp now offer private pension plans and could benefit from a significant expansion in this market.

Around 18% of private-pension money was invested in domestic and foreign equities, and 39% in savings and deposits as of March 2015, according to the Japan Defined-Contribution Pension Plan Administration. By contrast, Japanese households during the same period invested just under 10% of their assets in equities and kept over 50 percent in cash and deposits, according to Bank of Japan data.

“I know the risk isn’t zero,” said a 37-year-old Japanese businesswoman who is applying for a private pension account. “But if I don’t take a risk, my money won’t increase. I need to take some level of risk and I accept that.”

The woman, who works at a company in eastern Tokyo, said she plans to invest more in stocks than in debt, with a focus on foreign equities including those from emerging markets. She is new to investing, and reads blogs and articles on personal finance and attends seminars about investment to decide what assets to choose, she said.

“I’m more at ease taking care of my own money than doing nothing and leaving it all to the government,” she added. “Doing nothing is much more risky.”

Just over a quarter of Japan’s population is aged 65 and over and that number is projected to rise to a third by 2035, according to Japanese government data.

Japan’s birthrate has been declining for years and hit a record low of eight births per thousand in 2014. That means fewer workers to support the ever-expanding population of elderly: The number of people in the workforce is expected to decline by about 20% to 63.4 million in 2035.

Those under 40 will pay far more into the state pension scheme over their lifetimes than did their elders, according to data from Japan’s Ministry of Health, Labour and Welfare.

Current 70-year-olds will receive five times more in benefits than what they paid into the system. Current 20- and 30-year-olds, however, will receive only around twice the amount they will have paid the state.

This is fuelling concerns among working-age Japanese they could be left high and dry once they hit retirement.

“I can’t rely on the country for my well-being. That’s impossible,” Yuko Narita, a 48-year-old mother and housewife, told Reuters.

Narita set up a private pension account last December, in part because she discovered she would receive just 100,000 yen per month in retirement benefits, even after working for 20 years at an insurance company, she said.

A typical retired couple today receives around 220,000 yen a month, and over 80% of the population thinks state retirement benefits already are not enough to live on, according to a survey by Japan Institute of Life Insurances.

To be sure, government pensions will remain the backbone of retirement funding. Only those who pay state pension fees are eligible to set up private pension accounts.

“The welfare ministry is in a difficult position – it will not and cannot say, ‘public pensions are in trouble and you won’t be receiving much,’” said Hideyuki Morito, a member of a government panel on pensions and professor of law at Keio University.