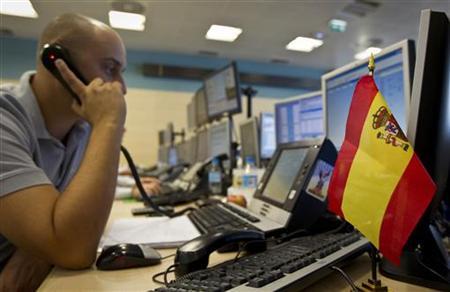 SPAIN : Borrowing costs in Spain touched their highest levels in almost three weeks on Tuesday, widening the gap with benchmark Germany ahead of an anticipated sale of a new 10-year Spanish bond.

Spain has hired a group of banks to sell the new benchmark bond via a syndication in the near future, Thomson Reuters IFR reported on Monday.

Analysts say the bond could be launched on Tuesday as Spain’s government looks to take advantage of a recent tumble in borrowing costs.

Societe Generale said it expected the issue to be in a range of 3 to 5 billion euros, smaller than previous syndicated bond deals, given that Spain is also selling bonds at an auction on Thursday.

It was last down 1 basis point at 1.23 percent, marginally underperforming other euro zone bonds whose yields were 2 bps lower.

It has been pulled lower since then by speculation about changes to the European Central Bank’s monetary stimulus programme and hopes of political stability in Spain after a June 26 election saw acting Prime Minister Mariano Rajoy’s party win the most votes.

According to JPMorgan, the cost of bond funding has on average more than halved for euro area countries since the start of 2016.

That provides a favourable backdrop for governments looking to borrow money in financial markets.

Speculation the ECB, which meets this Thursday, could abandon its “capital key” to free up more bonds for quantitative easing, has given peripheral bond markets an additional boost in recent weeks.

The capital key is a system whereby the ECB buys bonds in euro zone countries in proportion to the size of their economies. To increase the pool of bonds it can buy, it could abandon this in favour of a system that is more in line with outstanding debt, which is seen benefiting southern Europe.

“In general, I am sceptical about demand for the new Spanish bond,” said DZ Bank analyst Daniel Lenz.

“Spreads have tightened significantly because of speculation about changes to the capital key, but any changes to the ECB’s stimulus programme as early as this week are unlikely.”