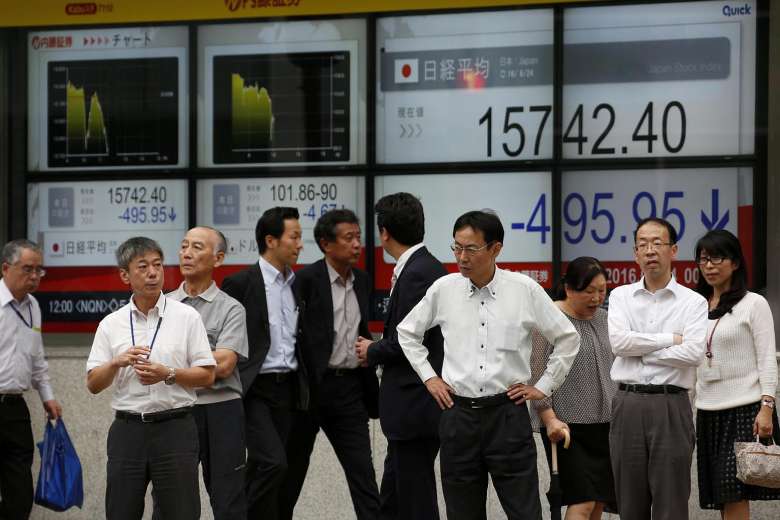 TOKYO : Asian shares slipped on Tuesday, as a downturn in crude oil curbed the enthusiasm from fresh record highs on Wall Street.

MSCI’s broadest index of Asia-Pacific shares outside Japan .MIAPJ0000PUS was down 0.6 percent, moving away from a nine-month high touched last week which put it into technically overbought territory.

China’s yuan steadied against the dollar, a day after slipping below the psychologically important 6.7 level for the first time in more than five years. Still, traders expect downward pressure on the currency to persist.

China stocks were lower, with both the CSI300 index .CSI300 of the largest listed companies in Shanghai and Shenzhen and the Shanghai Composite Index .SSEC down 0.4 percent.

The Dow Jones industrial average .DJI and the S&P 500 .SPX both logged fresh record highs on Monday on hopes that a decline in U.S. corporate earnings is bottoming out. [.N]

“It’s hard to maintain consistent optimism when markets attain such high levels, and some profit-taking is natural,” said Ayako Sera, market economist at Sumitomo Mitsui Trust Bank in Tokyo, who noted that weaker oil prices were taking their toll on related sectors.

Pressure remained on crude oil prices after they settled down more than 1 percent on Monday after rising stockpiles of crude and refined fuel intensified fears of another major supply glut. [O/R]

Japan’s Nikkei stock index .N225 pared early gains but was still up 0.5 percent, as markets reopened after a public holiday on Monday and responded to a weaker yen.

In the previous week, the benchmark index had gained 9.2 percent to notch its biggest weekly gain since December 2009, helped by Wall Street as well as hopes that the Bank of Japan will deliver further stimulus as early as its next policy meeting later this month.

Japanese policymakers won’t go as far as funding government spending through direct debt monetization, but might pursue a mix of aggressive fiscal and monetary expansion to battle deflation, according to sources familiar with the matter.

A failed coup in Turkey had dented risk sentiment and bolstered the perceived safe-haven yen before it ran its course. On Monday, Turkey purged its police force after rounding up thousands of soldiers and called for the United States to hand over a cleric that the Turkish government accuses of being behind the takeover attempt.

The dollar took a step back after climbing to more than three-week highs against the yen. It was last down 0.3 percent at 105.90 yen JPY=, after rising as high as 106.33 earlier in the session, its highest since June 24.

The European Central Bank will hold a regular policy meeting on Thursday, its last one before an eight-week summer break. It is not expected to take any additional easing steps.

Instead, ECB President Mario Draghi is likely to appeal to governments to do more to bolster the euro zone economy in the wake of Britain’s vote last month to exit the European Union.

“We expect the ECB to steer clear from any policy action,” strategists at Rabobank said.

“Gauging the Brexit impact will require more time and the September meeting would appear a more logical candidate,” they said, adding that questions in the post-meeting news conference are likely to focus on what options the ECB still has to ease or extend its current monetary policy.

Some bond traders believe the ECB might address scarcity of bonds it can buy under its 1.7 trillion euro stimulus program, with more than a half of German bonds now ineligible.

The dollar index .DXY, which gauges the greenback against a basket of currencies, was nearly unchanged on the day at 96.555.