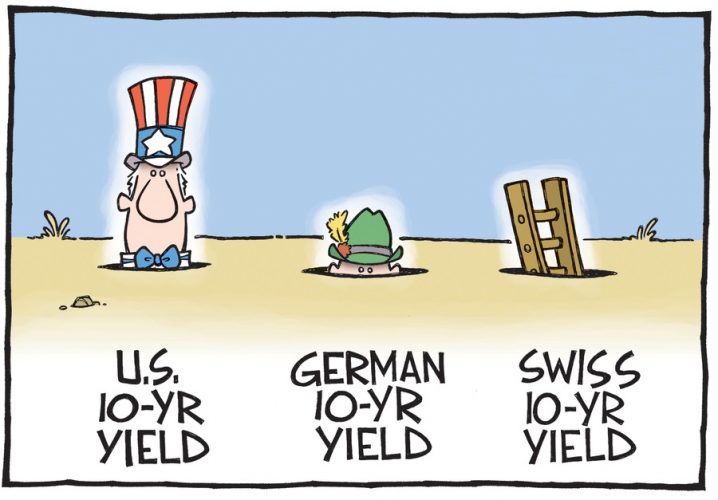 It’s the top story in the investment world right now

As we showed you yesterday, the S&P 500 just hit a new all-time high, topping 2,130 for the first time since May 2015.But it’s not just stocks that are ripping higher.

Bonds have quietly broken out to new all-time highs as well.

With rates this low, bondholders are barely earning any interest income. In Europe and Japan, investors are actually paying to lend the government money. That’s because negative interest rates have taken over these economies.

In today’s issue, we explain how negative rates have turned the bond market into a giant Ponzi scheme. And we’ll show you the best way to escape it…

Typically, you earn interest when you own a bond. With negative rates, you pay interest.

Negative rates were unheard of until about two years ago. Today, $ 12 trillion worth of government bonds have negative rates. That’s up from $ 6 trillion in February.

This is possible because central bankers in Europe and Japan have dropped rates below zero. They thought they could get folks to spend more money by “taxing” their savings. According to mainstream economists, this would grow the economy.

As regular readers know, that hasn’t been the case…

Europe is growing at the slowest pace since World War II. Japan’s economy hasn’t grown since the 1990s.

Negative rates have failed to lift stocks, too. The STOXX Europe 600, which tracks 600 large European stocks, is down 8% this year. It’s down 19% since peaking in April 2015.

Despite not working, negative rates are spreading like a plague…

Even countries without negative rates are affected by them. The Wall Street Journal wrote on Sunday:

The free fall in yields on developed-world government debt is dragging down rates on global bonds broadly, from sovereign debt in Taiwan and Lithuania to corporate bonds in the U.S., as investors fan out further in search of income…

As yields keep falling in these haven markets, investors are looking for income elsewhere, creating a black hole that is sucking down rates in ever longer maturities, emerging markets and riskier corporate debt.

“What we are seeing is a mechanical yield grab taking place in global bonds,” said Jack Kelly, an investment director at Standard Life Investments. “The pace of that yield grab accelerates as more bond markets move into negative yields and investors search for a smaller pool of substitutes.”

In a nutshell, negative rates have created a vicious cycle where investors are always “reaching for yield.”

They’re the price of borrowing money. And they’re supposed to convey important information to consumers, businesses, and investors. For example, a bond with a low rate should tell investors the borrower is creditworthy. It should mean there’s little risk of default.

At least, that’s how interest rates used to work…

With almost all interest rates near zero today, it’s almost impossible to know what’s risky and what isn’t.

Consider the government bond market, where most bonds pay next to nothing. With rates at all-time lows, some might think governments have become more creditworthy. According to The Wall Street Journal, the exact opposite has happened:

Sovereign credit ratings are on track for a record number of downgrades this year as declines in commodity prices hit emerging economies, according to Fitch Ratings.

The credit-ratings firm has downgraded 15 nations in the first half of the year, compared with a previous high of 20 downgrades for the whole of 2011. [Around the peak of the eurozone credit crisis.]

Japan is a prime example. Its 10-year government bond has an interest rate of -1.1%. If you own one of these bonds, you have to pay Japan’s government 11 yen each year for every 1,000 yen invested.

Remember, Japan’s economy hasn’t grown in two decades. The country is also drowning in debt. Its government debt-to-gross domestic product (GDP) is a staggering 250%. That’s the highest of any major economy by far.

Yet, investors are paying to lend Japan’s broke government money.

The same thing is happening in Italy, where $ 1.6 trillion worth of government bonds have negative rates. If you’ve been reading the Dispatch, you knowItaly is racing towards a full-blown banking crisis.

If you hold the bond until it matures, you’re guaranteed to lose money.

The only way to make money is to sell the bond for more than you paid for it. That requires finding a “greater fool.” Central bankers have essentially turned the bond market into the world’s biggest Ponzi scheme.

Many investors want nothing to do with negative rates…

They’ve fled bonds for the stock market, where it’s still possible to earn a decent return.

Stocks are also more volatile than bonds. As we recently explained, bonds performed much better than stocks during the last two financial crises.

With bonds paying next to nothing these days, stocks are “the only game left in town”…

As regular readers know, corporate earnings have plunged. Stocks are expensive. And the global economy is cooling.

In “normal times,” these problems would cause stocks to fall. Instead, with investors reaching for yield, the S&P 500 just hit a new all-time high.

Utilities and telecommunications stocks are this year’s top-performing sectors…

This reach for yield is a big reason why we’re not “buying” the recent rally in U.S. stocks…

If you’re nervous that this global interest rate experiment will end badly, we encourage you to own physical gold. As we often say, gold is real money. It’s preserved wealth for centuries because it’s unlike any other asset. It’s durable, easily divisible, and easy to transport. Its value doesn’t hinge on a government or central bank making smart decisions.

Instead, the price of gold often jumps when governments do destructive things like suppress interest rates or print money. That’s because these reckless policies destroy the value of currencies over time.

Over the past two years, the euro’s value has fluctuated by 25%. The yen’s value has swung 20%. These are giant moves for such short periods. Remember, we’re talking about the money in people’s wallets, not penny stocks. But we could see even more violent currency moves in the coming years.