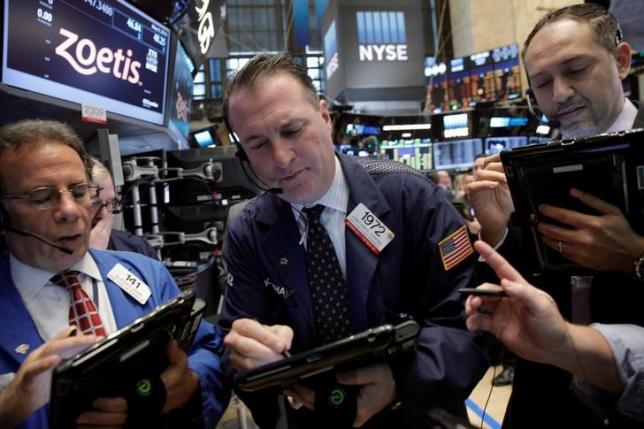 NEW YORK : The S&P 500 broke a record high on Monday it held for more than a year, as a string of upbeat economic data alongside low bond yields continued to funnel investors into U.S. equities.

However, the best performing S&P 500 sectors since the previous record have been defensive: utilities .SPLRCU, telecoms .SPLRCL and consumer staples .SPLRCS, all with double-digit percentage gains.

This outperformance in high-yielding areas of the market underscores longstanding investor concerns over the economy’s resilience in the face of global stagnation and feeds into the idea that ultra low bond yields have pushed fixed income investors into stocks.

“We don’t have the rising (bond) yields that would typically check the market rally, that’s one of the reasons we keep going higher,” said Jim Paulsen, chief investment strategist at Wells Capital Management in Minneapolis.

“I certainly think (low bond yields) are creating problems in the bond-like stocks. I wouldn’t want to be sitting in utilities or REITs right now.”

Despite his concerns, Paulsen said strong economic data – including last Friday’s much-better-than-expected payrolls report for June and the expectation that corporate earnings are turning a corner for the better – are supporting the market’s run to new highs.

This week marks the start of a flood of second-quarter earnings from S&P 500 components. Alcoa (AA.N) reports Monday after the closing bell. Earnings are expected to have fallen 5.0 percent last quarter compared to a year earlier. Earnings fell 5.0 percent in the first quarter.

The S&P is trading at 16.5 times earnings expected over the next 12 months, compared to the 20-year median of 15.5 times, according to Thomson Reuters Datastream.

Technology stocks led the way higher on Monday, and the Nasdaq Composite .IXIC hit its highest level this year.

Yields on 10-year U.S. Treasury notes US10YT=RR rose on Monday, but remained close to the record low of 1.321 percent hit last week in the aftermath of Britain’s vote to leave the European Union.

Advancing issues outnumbered declining ones on the NYSE by a 2.68-to-1 ratio; on Nasdaq, a 2.57-to-1 ratio favoured advancers.