China : If you live in China, chances are you can’t avoid Alibaba

The e-commerce giant offers a dizzying array of services that are designed to make it indispensable to Chinese consumers as they go about their daily routines.It’s a network that is growing rapidly thanks to a slew of ambitious acquisitions. Alibaba has spent between $ 30 and $ 40 billion on over 100 investments and acquisitions since 2010, according to Dealogic and Internet Retailer.

“Alibaba is aggressive — they want to literally build an online society to match wherever the consumer is consuming offline,” said Nicole Peng, China director at technology research firm Canalys. “Whatever you can do offline, you can do online too — that’s such a big thing.”

Typical urban residents can wake up and find the day’s weather forecast on UCWeb, nosh on fresh fruit purchased from Yiguo.com, pay for a cab to work with Alipay, and procrastinate on the job by sneaking a peek at Youku videos. After work, they can head home to sleep in sheets bought off the Taobao marketplace.

Even mom-and-pop outfits in rural villages are buying and selling on Alibaba’s platforms.

To help expand its roster of services even further, Alibaba (BABA, Tech30) spent $ 1 billion earlier this year to buy Lazada, a dominant e-commerce platform in southeast Asia, with a strong logistics business. In 2014, the company dished out about $ 2 billion for UCWeb, one of China’s most popular browsers. Its largest deal ever was about $ 5 billion for Youku, China’s version of YouTube. 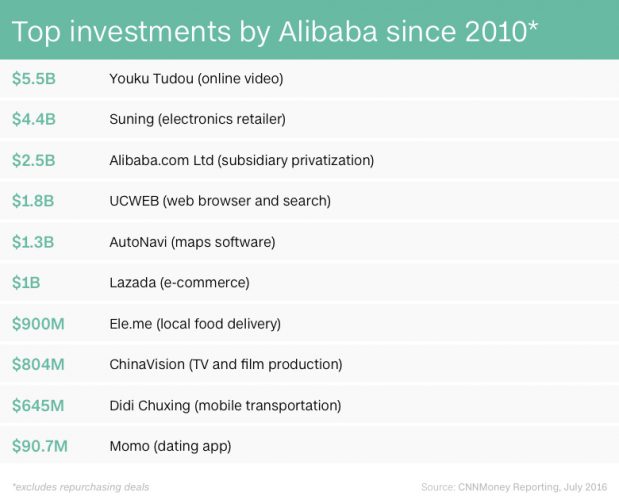 Peng said Alibaba’s investments are designed to feed each other and provide a closed loop of products and services, delivering a seamless experience for the customer every step of the way.

The Hangzhou-based firm first started snapping up companies in a frenzy before its record-breaking $ 25 billion IPO in 2014. At the time, the moves puzzled potential investors.

The purchase of soccer team Guangzhou Evergrande was heavily criticized as a vanity purchase. It’s been reported that Alibaba founder Jack Ma struck the deal over drinks, and finalized it during a 15-minute phone call the next day. Ma’s decision to later buy an English-language daily newspaper published in Hong Kong, the South China Morning Post, also raised eyebrows.

“It’s not all woven together yet,” Kerry Rice, an analyst at Needham & Company, said of Alibaba’s investments. The company’s shares, which have also been hit by concerns over the sale of counterfeit goods, have lost 16% since their market debut.

But analysts see discipline in the way Alibaba nurtures its investment targets. Instead of buying firms outright, the company typically makes a small investment, and then allows the target firm to bloom before increasing its stake. Its acquisition of UCWeb is a good example. Before gobbling up the company whole, Alibaba already held a 66% stake.

This approach allows Alibaba to partner with a larger number of companies, while minimizing overall risk. “That to me seems like a capital-efficient way to manage an M&A strategy,” said RJ Hottovy of Morningstar.

Rice said Alibaba’s next challenge is integrating its entertainment and commercial properties in a way that capitalizes on its store of user data. For example, if Guangzhou Evergrande fans watch Youku video from a match, they could be shown an Adidas advertisement that links to one of Alibaba’s shopping sites.

Alibaba is not the only Chinese tech firm hoping to broaden its reach through acquisitions. Tencent (TCEHY), which started with web portal services, later branched out to offer popular instant messaging services, and has become China’s leader in mobile and computer games, snapping up multiple gaming firms.

In some cases, Alibaba has also invested in the same areas as its rivals, as competition heats up to grab more market share. Both Tencent and Alibaba, for example, backed two popular taxi-hailing apps in China, joining forces after the companies merged into one firm, Didi Chuxing.

While Alibaba remains “very, very ambitious,” according to Peng, investors might have to wait for the payoff, since many of its buys “aren’t bringing in great revenues yet.”

A spokesman for Alibaba declined to comment for this story.

During the company’s recent investor day, Alibaba told analysts that its “M&A and investments are always done for strategic reasons, never for financial reasons.”