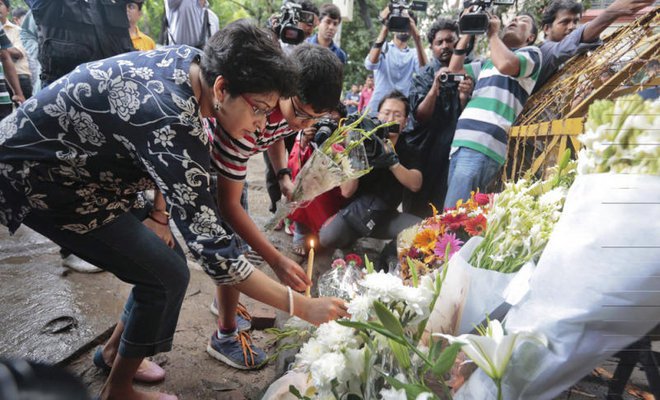 DHAKA : On the last Friday of Ramadan, Meer Hayet Kabir was hoping his son Meer Saameh Mubasheer, missing for the past four months, would come home. In Bangladesh, even kidnappers sometimes released hostages on a holy day.

The 18-year-old did return to the capital Dhaka that night, but not to his father. Instead police believe he, along with at least four other gunmen, attacked an upscale restaurant in the city and murdered 20 people, mostly foreigners.

Now he is dead, killed with his fellow assailants by police.

On Tuesday, still in shock, Kabir was trying to make sense of what happened and what made the quiet, soft-spoken teenager give up a privileged life and loving home in one of Dhaka’s upscale neighbourhoods to take up arms in the name of radical Islamism. Islamic State claimed responsibility for the attack.

“I still don’t want to believe my son has done it with his own, conscious mind,” he told a small group of reporters who visited his home.

It is a question many people in Bangladesh are asking after the attack on Friday, one of the most brazen in the South Asian nation’s history and potentially damaging to its $ 26 billion garment export industry.

Most of the attackers were young like Mubasheer, went to some of the best schools and came from well-to-do families.

Another suspected attacker, Nibras Islam, was around 22 and went to Monash University in Malaysia, where a bachelor’s course costs nearly $ 9,000 a year, at least six times the average income in Bangladesh.

As the stories of the militants emerge, they are challenging the popular narrative that poverty and illiteracy are the key ingredients in the making of a South Asian militant.

Kabir, a telecoms executive, blamed Islamist groups in the country for luring his son away. Some people close to the family blamed it on the Internet, while Kabir thinks the smartphone he gave his son months before his disappearance might have been the way extremist groups reached him.

He said that if such groups could radicalise someone who came from a loving family and was getting secular education at the elite Dhaka school Scholastica, no one should feel safe.

H.T. Imam, political adviser to Prime Minister Sheikh Hasina, told Reuters the attackers could not have acted alone and must have come in contact with radicals who influenced them. Imam said the militants’ parents should also be investigated.

As a child, Kabir said his son was interested in dinosaurs and could memorize several of the animals’ complicated names.

“His one speciality is that once he is interested in something he will get into details,” Kabir said.

During a visit to India around eight years ago, the family visited the city of Agra, home to the famous Taj Mahal. After that, Mubasheer became interested in history and started drawing pictures of Mughal emperor Akbar and Hindu Goddess Durga.

Over the next few years, he also began to study Bangladesh’s history, including its 1971 war of independence from Pakistan.

“He would buy independence war-related movies, dramas. That was his craze,” Kabir said.

Mubasheer was also fond of watching English films and cartoons. Occasionally he cooked food for himself and his father.

In the months before his disappearance, Kabir said he noticed no visible change in his behaviour, other than that he stopped using Facebook and focussed more on studies.

Family pictures at their spacious home, complete with tiled floors and a chandelier, depicted a normal childhood; in one, Mubasheer stands with his elder brother and plays a synthesizer.

But his “mental growth was slow,” Kabir said.

“His classmates also noticed it. They would say he was a Mamma’s boy. He would not like it.”

Other than hobbies, Mubasheer was always interested in religion. His father advised him to use the right sources for learning about the subject when he gave him an English version of the Koran.

Inside Mubasheer’s small bedroom, a photograph of the Koran hung on a wall behind his bed, next to a study table that was covered with books on business studies, accounting and TOEFL, an English language test.

Mubasheer would usually pray five times a day and visit a nearby mosque.

Kabir has yet to go and identify the body believed to be that of his son.

“I am hoping a miracle happens, that he is not one of these guys.”