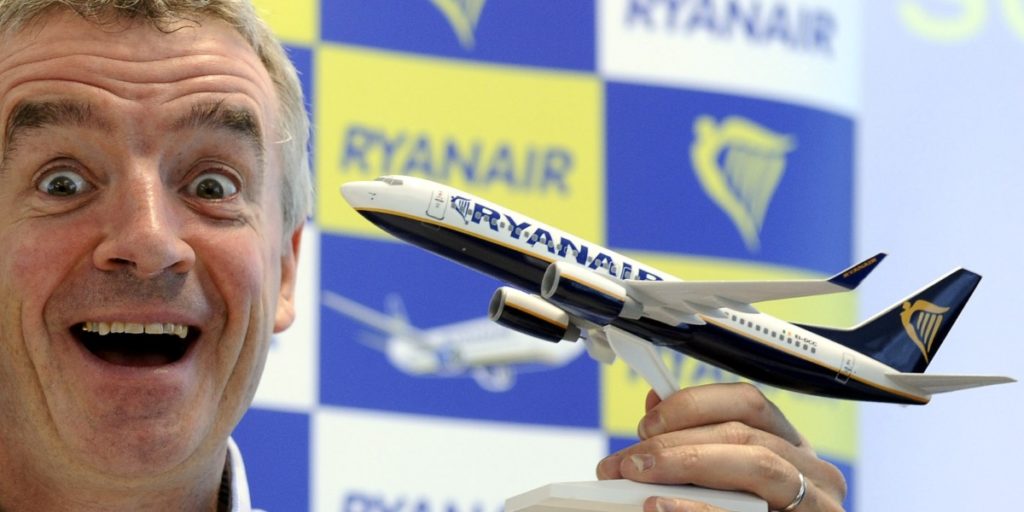 Here’s a daring prediction of what from one of Europe’s top CEOs: Brexit, despite all you had heard, is not actually going to happen, ever.

Michael O’Leary, the CEO of Ryanair, says Britain will suffer a steep recession. A new government will be forced to raise taxes and slash spending. But, O’Leary says, the damage will be so devastating that the new Conservative government may totally reverse course by either calling a new referendum or championing a vote in Parliament to reject the Brexit vote. In a year or two, Britain will make a big, expensive, nerve-racking U-turn, and end up back where it started, as a full member of the European Community. In the end, Bremain prevails.

Michael O’Leary is as good an expert on what will happen to Europe as anyone. As chief of Ireland’s ultra-no-frills carrier for more than two decades, O’Leary, 55, has built Ryanair into Europe’s leading airline in both market cap ($ 19 billion) and yearly passengers flow (over 100 million), and ranks as Ireland’s most successful business leader. He’s almost as famous for his outrageous antics and pronouncements as his entrepreneurship, having donned Papal-style robes to promote Ryanair’s new route from Dublin to Rome, lauded a company calendar featuring the flight-attendants-of-the-month clad in bikinis, and flirted with the concept of charging passengers to go to the potty.

It was the creation of a unified, barrier-free market for aviation in Europe that allowed carriers to fly from London to Warsaw and Lisbon to Paris, and opened the skies to budget carriers, led by Ryanair and Britain’s easyJet. Virtually no other business leader has benefited more from the single market than O’Leary. So you might want to take his views with a pinch of skepticism, particularly about how Brexit threatens Europe’s future prosperity. Indeed, O’Leary sees one of the EU’s historic accomplishments is to have delivered affordable airfares to hundreds of millions of travelers.

Nonetheless, O’Leary is certainly worth listening to. In a 40-minute phone interview on June 29th, one of the few he has given since the Brexit vote, O’Leary, as usual, didn’t hold back. He began by acknowledging that his predictions on the Brexit vote were all wrong. “I caution about all my predictions, because I forecasted that ‘remain’ would win with 54% of the vote, and we campaigned hard for remain,” he declared. “I’m not legendary for my good predictions.”

Still, that wrong call isn’t stopping O’Leary from a new set of predictions, expressed with characteristic confidence. “The ‘leave’ people said we were fear-mongering, and now we’re already in crisis, and the UK hasn’t even left yet. This is why the leave side is dangerous. They didn’t think it would happen, they never confronted these issue. All their promises are completely bull. They have no idea what to do next.”

O’Leary’s best guess is that the new leaders pull what he calls a “Tsipras” He’s referring to the gambit orchestrated by Greek Prime Minister Alexis Tsipras, who essentially ignored a referendum where voters rejected austerity measures, then imposed them anyway. “The pro-Brexit people won on the basis of leave, and then once in power, they will reverse all the promises of leave.”

What O’Leary does see as a possibility is an sort of EU-lite, where Britain exits the EU, but still follows nearly all of the regulations on labor and environmental issues, and pays dearly for rights to free trade. He says that may prevent an economic meltdown in the UK, but emphasizes that it will also inflict heavy costs, and that Britain would get a lot more in return simply by reversing course and remaining a full EU member.

“This is the ‘Norway solution,’” he says, “where Norway gets free movement of goods and accepts free movement of labor. But the UK would need to obey 90% of the EU’s regulations, and have no ability to reject those regulations.” He’s also run plenty of numbers on what the EU may charge Britain for trading privileges. “Britain pays in 19 billion pounds today and gets back half, so the net outflow is 9.5 billion pounds. The EU will make Britain pay at least the full 19 billion to access the common market, and it will get nothing back, plus it will need to pay its 5 billion pounds in farm subsidies now paid by the EU on its own.”

“The EU won’t do this out of spite. It’s a political calculation. It’s much more important to the EU to prevent contagion to other countries that may be getting in the queue to leave the EU, such as France and the Netherlands than to give Britain a good deal. And the UK isn’t even in the euro! They won’t make it easy for the UK to leave.”

Why is the UK limited to those two choices, a reversal to “remain,” or EU-lite? According to O’Leary, it’s because taking a hard-line, anti-immigration stance that would banish Britain from the common market would be so disastrous that even hard-liners would relent. “They can’t go rebel,” says O’Leary. Top example: airlines.

The U.K., he predicts, would retaliate by applying similar rules for carriers seeking free access to its airports. “We’d need to set up a Ryanair UK with more than 50% UK ownership,” says O’Leary. “Britain would say, “What’s good for the goose is good for the gander,’ and apply the same ownership rules that the EU imposes on them. If Britain doesn’t at least remain in the EEA, it will chaos in the airline industry.”

The Brexit vote has already severely undermined investor confidence in airlines. Since the June 23 vote, Europe’s five largest carriers, Ryanair, IAG, Lufthansa, easyJet, and Air France-KLM have lost $ 14 billion, or 27%, of their market value, with Ryanair down 17%. Even now, O’Leary is reducing his investment plans for the U.K. “We’ll receive 50 new aircraft from Boeing over the next 12 months, and we were going to put 10 of them in the U.K.,” he says. “Now none of them will go to the U.K.”

What’s the outlook for Ryanair? “From our point of view, there will be a downturn in the EU. Traffic will rise but people will be a lot more price-sensitive. Our fares will probably decline, but we’ll gain market share with our price and cost advantage. In the short term it’s very challenging. IAG just issued a profit warning. But in the medium and long-term, it’s good.”

O’Leary had the right position on Brexit, though he missed the outcome by a big margin. This time, I’d bet that is forecast is right on. For Europe to skirt disaster, it better be.