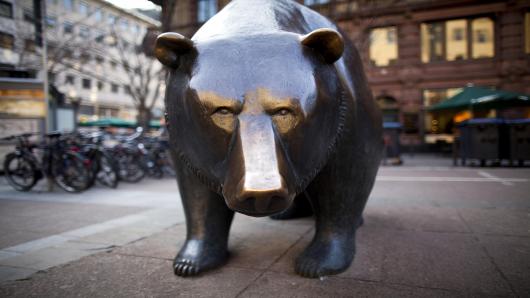 These stock markets are in correction (or worse)

Can you hear the bears growling?

The famous bronze bull sculpture continues to stand somewhat tall on Wall Street for now, but the bears are taking over in many global financial centers.

Stocks around the world are in the dumps, despite the little “breather rebound” Tuesday. The shock Brexit vote triggered a sell-off that got so bad that markets in Europe, Japan and China have fallen back into “bear market” status. That means they’ve fallen 20% or more from their recent 2015 highs (most markets peaked in the spring of summer last year).Here’s a look at which markets have slid into bear status (20% drop) or correction status (10%) drop. Notice that even the United States hasn’t gone unscathed. The tech-heavy Nasdaq composite index also fell back into correction after Brexit. Also, some Asian stock markets were already in bear territory, but Brexit pushed them even deeper in the hole.

What’s next for stocks?

The broader U.S. market is noticeably absent from the list (other than the tech-heavy Nasdaq). The Dow and the S&P 500 have only fallen about 5% from their highs. Only a few days before Brexit, these key U.S. stock market gauges were approaching their 2015 all-time record highs.

The key to turnaround in stock markets — in the U.S. and elsewhere — is whether this downturn sticks around long enough to trigger a recession.

“It all boils down to: what is the likelihood of a global or U.S. recession. If there really is no likelihood of that kind of decline, the market says ok, that’s it and moves on,” says Sam Stovall, director of U.S. equity strategy and S&P Global Market Intelligence.

He says to watch the markets closely through July 22, or thereabouts. After shock events like this, the market typically gets back to even in about 20 trading days.

The bearish case for stocks

But Mike O’Rourke of JonesTrading says don’t get your hopes up too much for the global markets. He calls the U.S. “the best house in a bad global neighborhood.”

Even if stocks do recover most of the losses, O’Rourke says the underlying fundamentals haven’t changed. Economic and earnings growth are still lackluster. There simply isn’t a catalyst to take stocks higher.

“You don’t know you’re cooked until it’s too late,” he says. The only area of the world O’Rourke likes is emerging markets.

“They are still edgy and risky relative to other places, but values have stabilized and offer much more upside,” O’Rourke wrote in a note late Monday.

Indeed the best stock markets so far in 2016 are Argentina and Brazil. Despite all the trauma in stocks, the MSCI Emerging Market Index overall is still positive for the year.