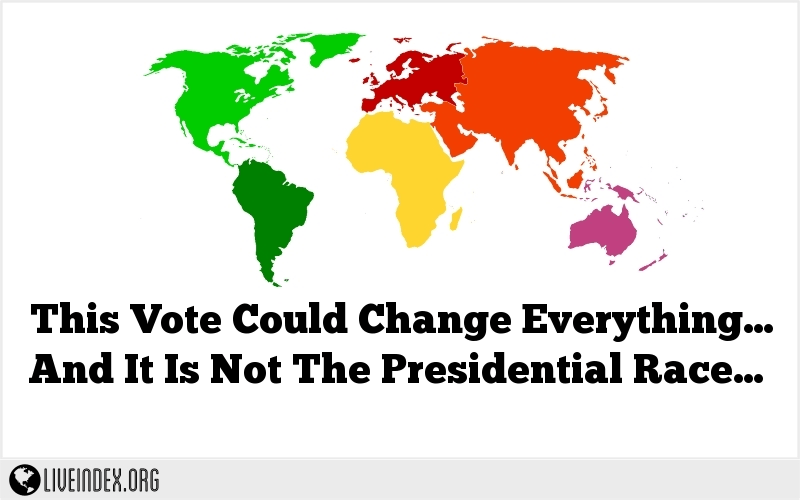 On June 23rd, a vote will be held in the United Kingdom to determine if Britain will stay in the European Union or not.  This is most commonly known as the “Brexit” vote, and that term was created by combining the words “Britain” and “exit”.  If the UK votes to stay in the European Union, things over in Europe will continue on pretty much as they have been.  But if the UK votes to leave, it will likely throw the entire continent into a state of economic and financial chaos.  And considering how bad the European economy is already, this could be the trigger that plunges Europe into a full-blown depression.

So if things will likely be much worse in the short-term if Britain leaves the EU, then it makes sense for everyone to vote to stay, right?

Unfortunately, it isn’t that simple.  Because this choice is not about short-term economics.  Rather, the choice is about long-term freedom.

The EU is a horribly anti-democratic bureaucratic monstrosity that is suffocating the life out of most of Europe a little bit more with each passing year.  So if I was British, I would most definitely be voting to leave the EU.

And in recent days, the campaign to leave has been rapidly picking up steam.  In fact, two of the latest major surveys show that “leave” has taken the lead…

An ORB poll for the Telegraph showed 48 percent of Britons would vote to remain in the European Union, while 49 percent would vote to leave.

A YouGov poll for the Times of London showed 46 percent preferred to leave, while 39 percent wanted to remain.

Two other recent polls have “leave” ahead by 10 points, and there is another that actually has “leave” winning by 19 points.

The “leave” movement got a big boost just recently when the Sun officially endorsed that position.  The following is an excerpt from the editorial that announced this decision…

WE are about to make the biggest ­political decision of our lives. The Sun urges everyone to vote LEAVE.

We must set ourselves free from dictatorial Brussels.

Throughout our 43-year membership of the European Union it has proved increasingly greedy, wasteful, bullying and breathtakingly incompetent in a crisis.

Next Thursday, at the ballot box, we can correct this huge and ­historic mistake.

It is our last chance. Because, be in no doubt, our future looks far bleaker if we stay in.

I must say that I agree entirely with the Sun.  However, everyone needs to understand that a Brexit would be incredibly painful for the UK and for the rest of Europe in the short-term.  I think that Ambrose Evans-Pritchard of the Telegraph made this point very well in his recent column…

Let there be no illusion about the trauma of Brexit. Anybody who claims that Britain can lightly disengage after 43 years enmeshed in EU affairs is a charlatan or a dreamer, or has little contact with the realities of global finance and geopolitics.

So what could we potentially see happen?

Well, for one thing big banks like Morgan Stanley are warning that the euro and the British pound could take big hits…

The pound and the euro will be hit on a Leave vote, but even if Britain decides to stay in the EU, there will be only “modest gains.” Morgan Stanley expects the pound “to weaken immediately on a vote to Leave, but by year-end we think Euro could weaken even more.”

Secondly, there is a very strong probability that financial markets all over Europe could horribly crash, and the European Central Bank and the Bank of England are already promising to provide artificial support for the markets if that happens.  The following comes from Reuters…

The European Central Bank would publicly pledge to backstop financial markets in tandem with the Bank of England should Britain vote to leave the European Union, officials with knowledge of the matter told Reuters.

The preparations illustrate the heightened state of alert ahead of the June 23 referendum, which will help determine Britain’s future in trade and world affairs and also shape the EU. The pound and euro have lost value on fears a Brexit could tip the 28-member bloc into recession.

Such an announcement from the ECB would come on June 24 if an early-morning result showed that British voters had chosen to leave the EU, according to the sources.

But no matter what the consequences are, British voters should do what is right for their future and for the future of their children.

If that means leaving the EU, then so be it.

Needless to say, the prospect of “leave” winning has many among the European elite in full-blown panic mode.  For instance, just consider what the current chairman of the Bilderberg Group is saying…

Just day after their mysterious annual meeting in Dresden, it appears The Bilderberg Group’s gravest concern is Brexit. While everything from The Middle East to Donald Trump was on the agenda, the remarks this week from AXA CEO (and Chairman of The Bilderberg Group) Henri de Castries that there is an “extremely high” probability that the U.K. will vote to leave the European Union and investors will face “a true landscape of uncertainties,” suggest the establishment is concerned.

If you are not familiar with the Bilderberg Group, please see my recent article on them.  Certainly the potential of a coming “Brexit” was high on the list of priorities during their recent conference, and it has been documented that the Bilderberg Group played a key role in the creation of the European Union in the first place.  So of course they are not exactly pleased that their grand experiment may now be unraveling right in front of their eyes.

Meanwhile, even without taking into account a potential “Brexit” things just continue to steadily get worse over in Europe.  On Tuesday, European stocks hit their lowest levels since the stock market crash that ended in February, and the stocks of both Deutsche Bank and Credit Suisse hit all-time record lows…

The truth is that those extremely prominent European banks are headed for a collapse even without a “Brexit”.  But if there is a “leave” vote, that will just accelerate the process.

Here in the United States, the smart money is dumping stocks like crazy right now, and major investors such as George Soros are feverishly buying gold.

So why are these things happening?

Do those “in the know” have some information regarding what is about to happen over in Europe?

I don’t know exactly what is going to happen on the 23rd, but without a doubt we should all be watching the outcome very, very closely…

About the author: Michael Snyder is the founder and publisher of The Economic Collapse Blog. Michael’s controversial new book about Bible prophecy entitled “The Rapture Verdict” is available in paperback and for the Kindle on Amazon.com.