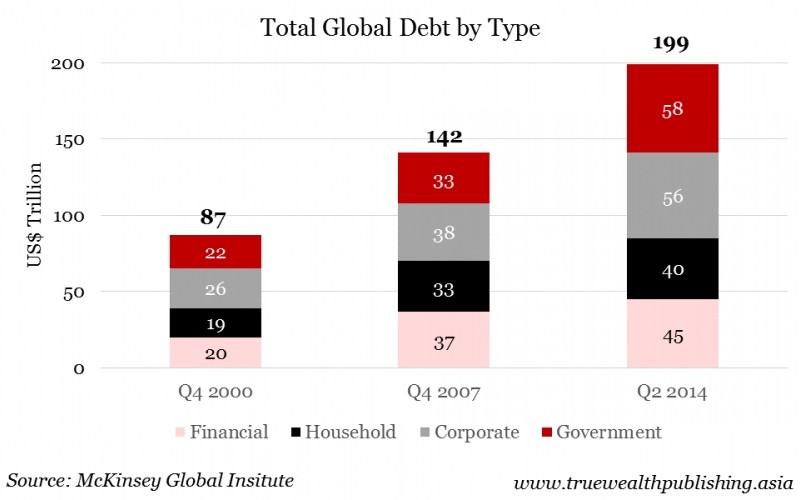 Another Real Estate Market Ripe For A Bust

Do you remember the movie American Psycho where nobody was afraid of Patrick Bateman? At least not until they were all relaxed and then… Whoah! He reared up with that shiny axe and chopped them into bits.

As a viewer you knew the guy clearly had issues. And after the first murder even the slowest amongst us had more than just an inkling that the perception of risk and the reality of risk were at odds.

Today we’re looking at the same sort of situation. But it takes stepping aside from the herd to view it for what it really is.

Just as the victims in American Psycho didn’t see risk until they had a spiky knife plunging into them, the markets today seem to think the unprecedented central bank “we’ll do whatever it takes” intervention we’ve become so accustomed to presents no risk. None.

We can see this in the pricing of risk. They seem to think that 700 year lows in interest rates mark an extraordinary accomplishment which, I’ll grant they do, just not in the way most think about it.

This is a topic often discussed with friends and colleagues and one of those friends, Kim Iskyan, showed me this chart. 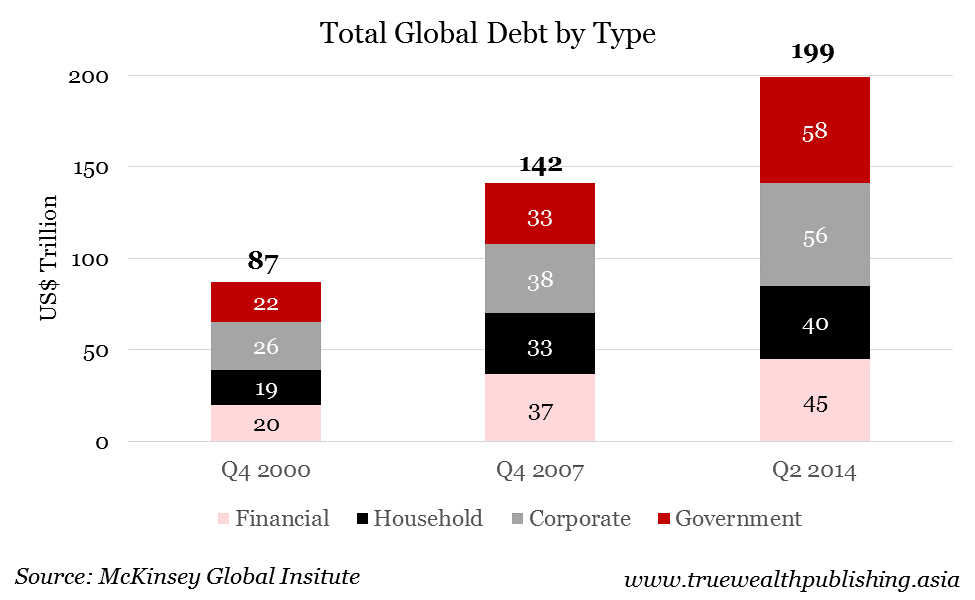 Kim recently wrote a great piece on debt, which I would encourage you to read. It goes some way into detailing just how extraordinary the situation is.

I’ve been involved in finance for over 15 years now and have always been an avid fan of history. This brings with it two things:

There are a number of ways I as well as some of the sharpest guys I know in finance are playing these anomalies. I will be discussing these in greater detail soon with a dedicated subscriber service. But for now let me show you one of the knock-on effects of this unique mis-pricing of risk.

Now as nutty as Australian real estate is, I thought it worth discussing the small, empty island next door: New Zealand.

There is a saying that New Zealand is a country where men are men and sheep are scared. Well, sheep are the least of New Zealanders’ problems.

New Zealanders, like their Australian friends, love rugby and real estate. I’m not sure which they love more but both topics are debated heatedly everywhere and all the time.

Kiwis’ love affair with rugby has seen them win the last rugby world cup – no small feat for a country with a population rivalling that of an average Bangladeshi apartment building.

On the other hand, their love affair with housing has resulted in Kiwi households now carrying debt 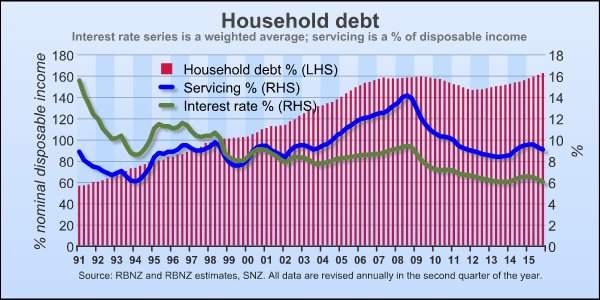 In the last 5 years alone household debt has risen 23% while incomes have risen by just 11.5%. How is this possible, you may ask?

Like Bateman’s victims and their Australian cousins, Kiwis have ignored the warning signs and instead have been seduced by lower and lower interest costs on their debt.

Aggregate debt becomes meaningless as the cost to carry that debt. 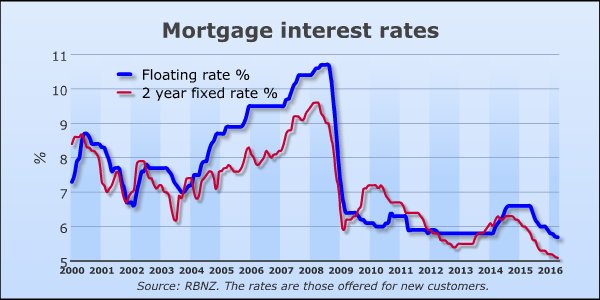 Think about it: the average Joe Sixpack has lost touch with the aggregate debt he’s taking on. Instead, he wanders into the local bank where – together with a banker who understands neither economics nor history – they crunch some numbers. Numbers which are based on Joe’s ability to pay the monthly tab on an amortised mortgage over 20 to 30 years and where interest rates are extrapolated into perpetuity. Interest rates which are at 50+ year lows!

Little does Joe realise he’s sitting down with Bateman organising a dinner date in a quiet secluded spot.

What makes New Zealand particularly vulnerable is the fact that it has no domestic capital markets and as such borrows offshore. But offshore lenders don’t like currency risk which they’re taking as all lending takes place against NZD denominated assets.

Banks have to match the fixed rate mortgages against what is mostly floating rate borrowing. And since the NZ housing market is the largest single form of borrowing it is the biggest influencer on New Zealand swap rates.

Because most of the debt that NZ banks take on is floating, they pass this risk onto borrowers. And so it’s no surprise that the vast majority of NZ mortgage debt is either floating or fixed for no longer than 2 years at initiation. Offering anything longer means NZ banks would be taking on risk they simply can’t hedge economically.

Any sudden rise in the cost of offshore borrowing can have a disproportionate effect on mortgage rates and the debt payments Joe Sixpack is making. Joe remains completely unhedged against interest rate risk. And there is precious little he can do about it unless he’s sophisticated enough to hedge his mortgage risk in the futures market – something I assure you is as likely as my following Justin Bieber on Twitter.

Simple volatility in the currency can cause risk premiums to rise as offshore lenders hedge this volatility risk but most Kiwis don’t seem to understand this risk. And that is at a time when the Kiwi dollar is under pressure due to the USD bull market, coupled with falling commodity prices, dairy in particular.

But What About Supply, Chris?

Good question and worthy of considering. There exists a supply shortage which is especially acute in Auckland. This has fuelled price appreciation and may continue to do so.

But ultimately I’m reminded of walking the streets of cities like Harare or Yangon where you have scores of people living on the streets. People who need homes but also people who ultimately cannot afford one.

The below chart shows that NZ is second only to Qatar in real house price growth. 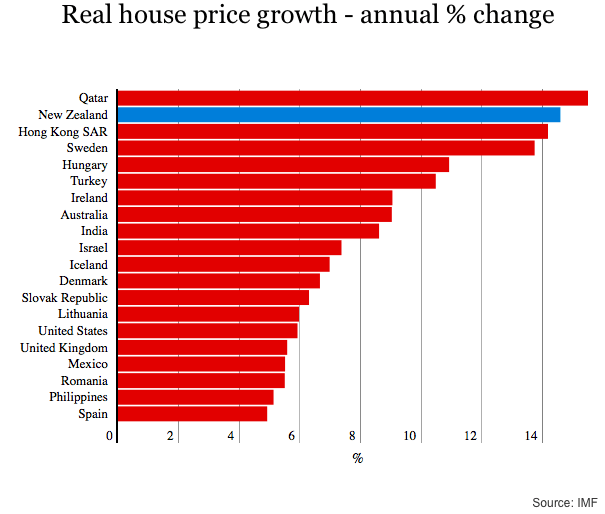 While I realise only a fractionally tiny amount of readers will be living in either Sydney or Auckland; and of those who are, an even smaller percentage will have mortgages.

But for those who have mortgages in any of those place, it is certainly worth considering the data and realising that the perception of risk by the broad market and that of your neighbours may be akin to Batemans victims in American Psycho. Maybe, just maybe, it’s time to hit the bid!

For the rest of us the way I think this plays out is through a weaker currency. Both the Reserve Bank of Australia and the Reserve Bank of New Zealand will likely continue to ease or hold rates low in the face of such high debt levels. Letting the domestic debt bomb detonate is neither politically viable nor economically viable.

Normally Aussie and Kiwi interest rates are higher than US, Euro or Japanese rates, making the currencies more attractive to traders who will play the carry trade. This advantage is eroded as those rates converge and traders will sell Australian and New Zealand dollars.

Something else to consider is buying certain companies which would benefit from a weaker local currency. Margin expansion happens where revenues are in US dollars and operating expenses are in local currency.

There is of course a bigger story here…
We’re at the end of the debt super cycle, and the market dislocations that play out as this unfolds promise to be of the life changing flavour. Real estate in Auckland, Sydney, Vancouver, Hong Kong – these are symptoms of a much bigger problem. A problem that will be sorted out painfully.

“Stock market bubbles don’t grow out of thin air. They have a solid basis in reality, but reality as distorted by a misconception.” – George Soros