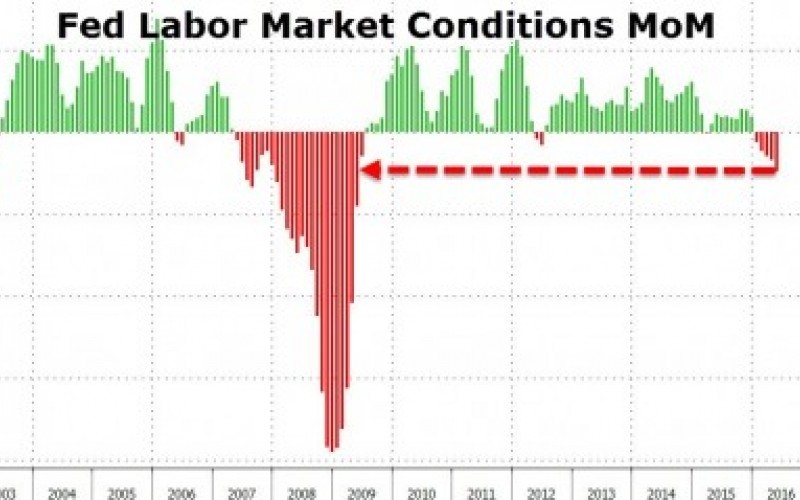 This Always Happens Right Before a Recession… And It Just Happened

What you are about to see is major confirmation that a new economic downturn has already begun.  Last Friday, the government released the worst jobs report in six years, and that has a lot of people really freaked out.  But when you really start digging into those numbers, you quickly find that things are even worse than most analysts are suggesting.  In particular, the number of temporary jobs in the United States has started to decline significantly after peaking last December.  Why this is so important is because the number of temporary jobs started to decline precipitously right before the last two recessions as well. 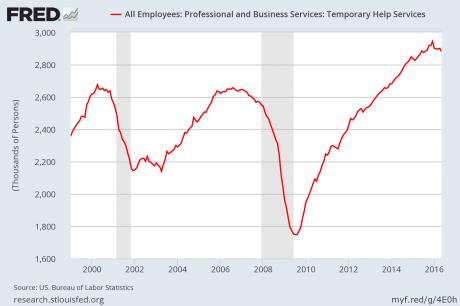 If a new economic downturn had already started, this is precisely what we would expect to see.  The following is some commentary from Wolf Richter…

Staffing agencies are cutting back because companies no longer need that many workers. Total business sales in the US have been declining since mid-2014. Productivity has been crummy and getting worse. Earnings are down for the fourth quarter in a row. Companies see that demand for their products is faltering, so the expense-cutting has started. The first to go are the hapless temporary workers.

Another indicator which is pointing to big trouble for American workers is the Fed Labor Market Conditions Index.  Just check out this chart from Zero Hedge, which shows that this index has now been falling on a month over month basis for five months in a row.  Not since the last recession have we seen that happen… 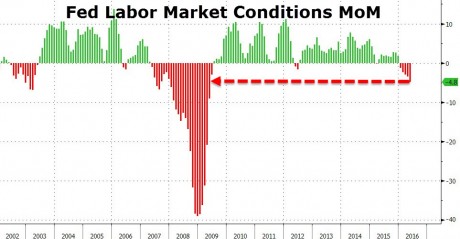 Of course I have been warning about this new economic downturn since the middle of last year.  U.S. factory orders have now been falling for 18 months in a row, job cut announcements at major companies are running 24 percent higher up to this point in 2016 than they were during the same time period in 2015, and just recently Microsoft said that they were going to be cutting 1,850 jobs as the market for smartphones continues to slow down.

As I have been warning for months, the exact same patterns that we witnessed just prior to the last major economic crisis are playing out once again right in front of our eyes.

Perhaps you have blind faith in Barack Obama, the Federal Reserve and our other “leaders”, and perhaps you are convinced that everything will turn out okay somehow, but there are others that are doing what they can to get prepared in advance.

It may surprise you to learn that George Soros is one of them.

According to recent media reports, George Soros has been selling off investments like crazy and has poured tremendous amounts of money into gold and gold stocks…

Maybe the best argument in favor of gold is that American legendary investor and billionaire George Soros has recently sold 37% of his stock and bought a lot more gold and gold stocks.

“George Soros, who once called gold ‘the ultimate bubble,’ has resumed buying the precious metal after a three-year hiatus. On Monday, the billionaire investor disclosed that in the first quarter he bought 1.05 million shares in SPDR Gold Trust, the world’s biggest gold exchanged-traded fund, valued at about $ 123.5 million,” Fortune and Reuters reported Tuesday.

George Soros didn’t make his fortune by being a dummy.

Obviously he can see that something big is coming, and so he is making the moves that he feels are appropriate.

If you are waiting for some type of big announcement from the government that a recession has started, you are likely going to be waiting for quite a while.

How it usually works is that we are not told that we are in a recession until one has already been happening for an extended period of time.

For instance, back in mid-2008 Federal Reserve Chairman Ben Bernanke insisted that the U.S. economy was not heading into a recession even though we found out laterthat we were already in one at the moment Bernanke made that now infamous statement.

On my website, I have been documenting all of the red flags that are screaming that a new recession is here for months.

You can be like Ben Bernanke in 2008 and stick your head in the sand and pretend that nothing is happening, or you can honestly assess the situation at hand and adjust your strategies accordingly like George Soros is doing.

Of course I am not a fan of George Soros at all.  The shady things that he has done to promote the radical left around the globe are well documented.  But they don’t call people like him “the smart money” for no reason.

Down in Venezuela, the economic collapse has already gotten so bad that people are hunting dogs and cats for food.  For most of the rest of the world, things are not nearly that bad, and they won’t be that bad for a while yet.  But without a doubt, the global economy is moving in a very negative direction, and the pace of change is accelerating.

In the end, most people end up believing exactly what they want to believe, and we are not too far away from the time when those choices are going to have very severe consequences.