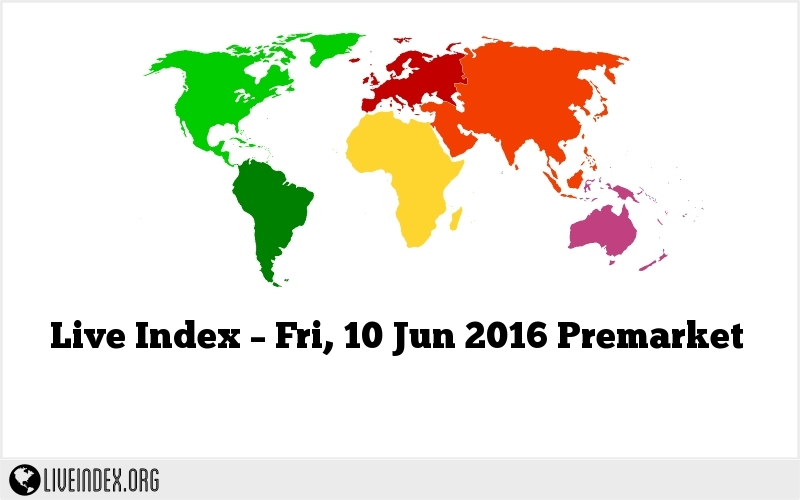 Sep E-mini S&Ps (ESU16 -0.52%) are down -0.58% and European stocks are down -2.11% at a 2-week low as global stock and commodity markets decline and government bond markets rally ahead of several potentially market-moving events. Chinese economic data on industrial production and retail sales is expected on Sunday and will provide further clues as to the health of China’s economy, the world’s second-biggest. The 2-day FOMC meeting begins Tuesday and markets will look to the post-FOMC meeting statement as to when the Fed might raise interest rates. Finally, market angst is growing ahead of the Jun 23 British ‘Brexit’ referendum and how it may affect financial markets. Global bond markets are the beneficiary of all this uncertainty as investors pile into the safety of government debt. Japan’s 10-year bond yield fell to a record low -0.155% and Germany’s 10-year bund yield dropped to a record low 0.020%. Asian stocks settled lower: Japan -0.40%, Hong Kong -1.20%, China and Taiwan closed for holiday, Australia -0.92%, Singapore -0.73%, South Korea -0.49%, India -0.48%.

ECB Council member Jazbec signaled that he does not favor additional ECB stimulus measures when he said that the ECB “has pledged enough” stimulus to return Eurozone inflation to its goal.

Former ECB President Trichet warned that a British yes vote on the June 23 Brexit referendum would be a “catastrophe” for the UK. Trichet’s comments add to the growing list of warnings, including from the BOE and IMF, that a Brexit could trigger a UK recession. A report published today said European equities could lose about a quarter of their value in the immediate aftermath of a yes vote for the UK to leave the EU.

Mobileye (MBLY -2.27%) gained over 1% in after-hours trading after it was rated a new ‘Overweight’ at Piper Jaffray with a price target of $ 50.

GigPeak (GIG +8.71%) dropped over 4% in after-hours trading after it started a secondary offering of 1.8 million shares of stock.

Wendy’s (WEN +0.68%) fell -0.3% in after-hours trading after the company said malware was found and disabled at some 50 of its franchise-operated restaurants and that payment cards used legitimately at Wendy’s may have been used fraudulently elsewhere.

Great Ajax Corp, (AJX +0.65%) fell over 3% in after-hours trading after it announced a public offering of common stock.

Organovo Holdings (ONVO -4.67%) jumped over 11% in after-hours trading after it reported a Q4 loss of -9 cents/share, a smaller loss than consensus of -11 cents.

September 10-year T-note prices (ZNU16 +0.15%) this morning are up +7.5 ticks at a new contract high. Thursday’s closes: TYU6 +6.00, FVU6 +3.25. Sep T-notes on Thursday rallied to a contract high and closed higher on carryover support from a rally in UK 10-year gilts and German 10-year bunds to record highs. T-notes were also boosted by safe-haven demand with the sell-off in stocks.