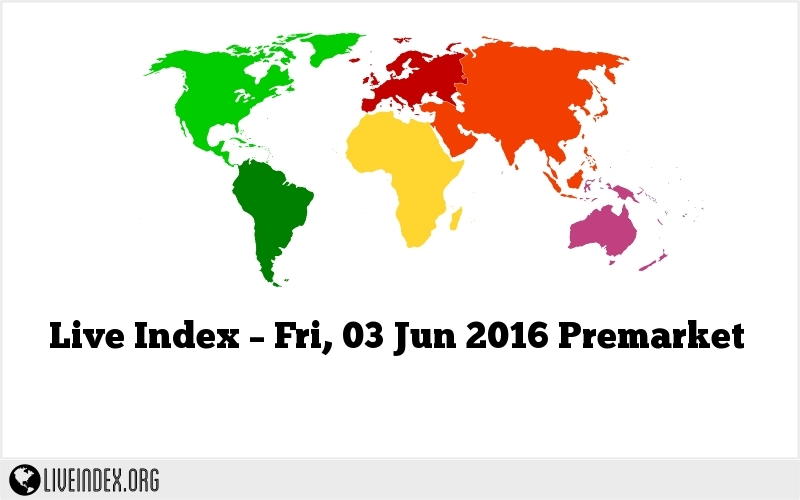 Jun E-mini S&Ps (ESM16 +0.02%) are little changed, down -0.02%, ahead of the monthly U.S. payroll data that may give clues about the strength of the economy. Chicago Fed President Evans said that two rates hike this year are probably “appropriate,” although the Fed may be better off waiting until after June because of the upcoming Brexit referendum. European stocks are up +0.48%, led by strength in mining stocks, as the price of copper (HGN16 +2.03%) jumped +2.13% on signs of tighter supplies in China after weekly Shanghai copper inventories fell -10,217 MT to a 4-1/4 month low. Gains in European stocks were limited, though, after Eurozone Apr retail sales were weaker than expected. The weak retail sales fueled a rally in German bunds which climbed to a 1-1/2 month high. Asian stocks settled mostly higher: Japan +0.48%, Hong Kong +0.42%, China +0.46%, Taiwan +0.37%, Australia +0.76%, Singapore +0.51%, South Korea +0.09%, India unchanged. China’s Shanghai Composite climbed to a 4-week high on speculation MSCI Inc. will include yuan-denominated shares in its global indexes.

Chicago Fed President Evans said that U.S. data has been more positive since the March FOMC meeting and that “two rate hikes are probably appropriate this year.” He added that the U.K. EU referendum makes policy more difficult and the Fed may be able to judge the outlook better after June.

Monsanto (MON -0.56%) climbed nearly 1% in pre-market trading after people familiar with the matter said Bayer AG has secured about $ 63 billion in financing from five banks for its proposed acquistion of the company.

The Gap (GPS +2.57%) climbed almost 5% in after-hours trading after it reported May comparable same store sales were down -6% y/y, better than estimates of -8% y/y.

China Biologic Products (CBPO -2.50%) fell over 2% in after-hours trading after it announced a secondary offering of 2.8 million shares of common stock.

Ambarella (AMBA +2.26%) jumped nearly 10% in pre-market trading after it reported Q1 adjusted EPS of 34 cents, better than consensus of 28 cents.

Bazaarvoice (BV +2.10%) rallied 9% in after-hours trading after it reported a Q4 adjusted loss of -1 cent, a smaller loss than consensus of -4 cents.

September 10-year T-note prices (ZNU16 +0.12%) this morning are up +3.5 ticks to a fresh 2-week high. Thursday’s closes: TYU6 +10.50, FVU6 +5.25. Sep T-notes on Thursday climbed to a 2-week high and closed higher on carryover support from a rally in German bunds to a 3-week high after ECB President Draghi said that risks to the Eurozone are still skewed to the downside.