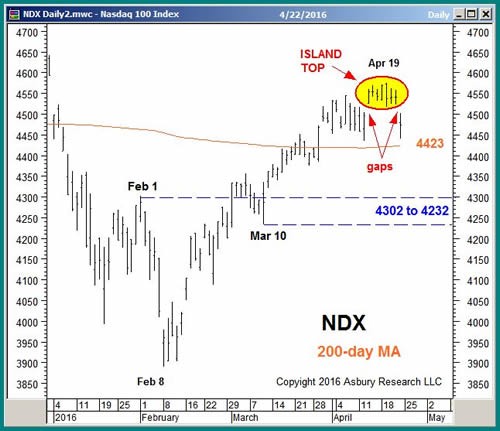 Apple’s Chart May Spell Trouble for the Market

All major U.S. stock indices posted gains last week except for the tech-heavy Nasdaq 100, which fell 1.5%. The losses in this typically market-leading index were driven in large part by the 3.8% drop in Apple (NASDAQ: AAPL). Although the trend in the market is clearly positive, the recent weakness in technology may become problematic if it persists for more than a week or two.

From a sector standpoint, last week’s overall market strength was driven by energy, which gained 5.5%. The weakest sectors were utilities (down 3.2%) and — you guessed it — technology (down 2%).

Asbury Research’s ETF asset flows-based metric shows the biggest positive percent change in sector bet-related investor assets over the past one-week and three-month periods occurred in energy, which is precisely what fueled the recent gains. This strength has resulted in an emerging bullish trend in the oil services sector, which I will discuss in more detail later in the report.

I have been pointing out a growing list of metrics that collectively warn of a market pullback sometime this quarter. These include overhead resistance in the market-leading PHLX Semiconductor (SOX) index and bullish investor sentiment, which I covered last week, frothy bullish momentum and seasonal headwinds. In addition, the chart below shows that a bearish chart pattern, a rare “island top,” emerged in the Nasdaq 100 at the end of last week.

An island top occurs when an exhaustion gap, which emerged between the high on April 12 and the low on April 13, is closely followed by a breakaway gap, which occurred between the April 21 low and April 22 high, leaving an “island” of price activity encased by gaps on both sides.

The pattern suggests a near-term peak is in place for the Nasdaq at its recent highs. It also targets a decline back to the 4,302 to 4,232 area, which is where the most recent advance originated and roughly 4% to 5% below Friday’s close.

Apple: A Canary in the Coal Mine?

A major contributor to the bearish island top pattern in the Nasdaq 100 was the decline in market bellwether Apple, the largest stock in the index based on market cap.

Over the past two weeks, Apple tested, failed and reversed lower from a major cluster of overhead resistance from $ 109.27 to $ 111, formed by the July downtrend line, the 200-day moving average and the November low. 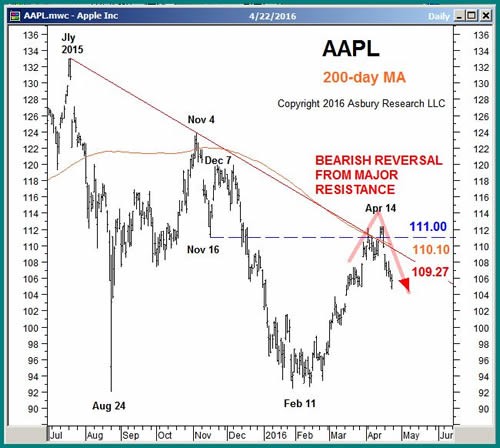 As long as this band of resistance holds, it adds support to the bearish case for the tech sector and the overall market.

Investors Especially Susceptible to a Scare

The most significant reversals tend to take place when the market is least expecting them. When stock tickers suddenly turn from green to red, terror can take hold and investors sell out in order to preserve capital.

The next chart shows investors are extremely complacent right now. The Volatility S&P 500 (VIX), or fear gauge, has been hovering near historic lows for the past several weeks, hitting a low of 12.50 on April 20. 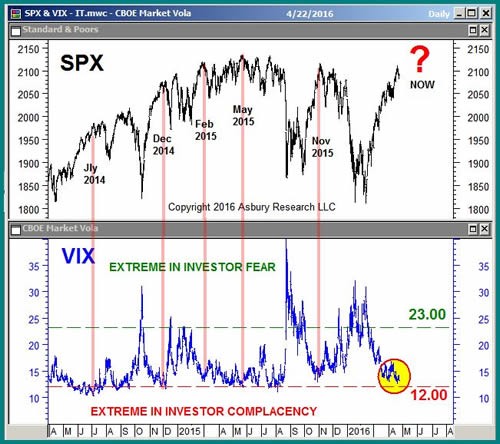 Similar complacent extremes have coincided with or led recent peaks in the S&P 500. So, even though it would take a sustained rise back above the VIX’s 50-day moving average, currently at 16.80, to indicate investors have become fearful enough to trigger a market decline, this metric does warn that such an event could be right around the corner.

Earlier in the report, I mentioned the recent inflow of investor assets into energy has fueled an emerging bullish trend in the oil services sector. Last week, the Market Vectors Oil Services ETF (NYSE: OIH) rose above its 200-day moving average for the first time since September 2014. 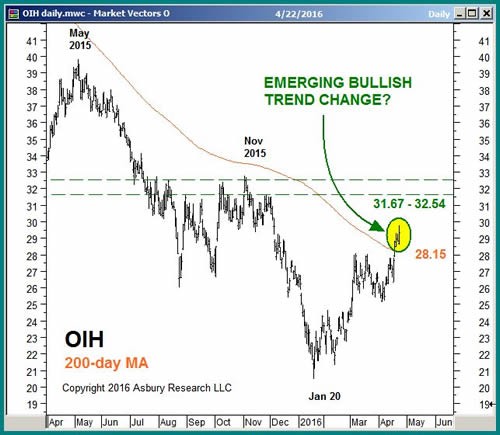 OIH’s move above this widely watched major trend proxy, especially amid positive investor asset flows, clears the way for more near-term strength. We could now see a test of the next resistance area at $ 31.67 to $ 32.54, which is 8% to 11% above Friday’s close and represents the August-October highs.

The major trend of the stock market remains positive as a number of key indices are challenging previous highs. While my longer-term bias for U.S. equities is also positive, stocks are vulnerable to a pullback in the second quarter before a sustainable move to new highs.

Market Outlook readers should keep protective stops tight and put together a shopping list of currently expensive stocks they want to own when a better buying opportunity emerges, possible later in the quarter.

Editor’s note: In addition to protective stops, one of the best ways traders can protect their portfolios is with simple put options. Many investors shy away from options, claiming they are too risky. But what is far riskier is failing to prepare for a market downturn. If you want to learn how to use options to survive — and profit from — the next big sell-off, an options expert has put together a free presentation that you can access for a limited time here.