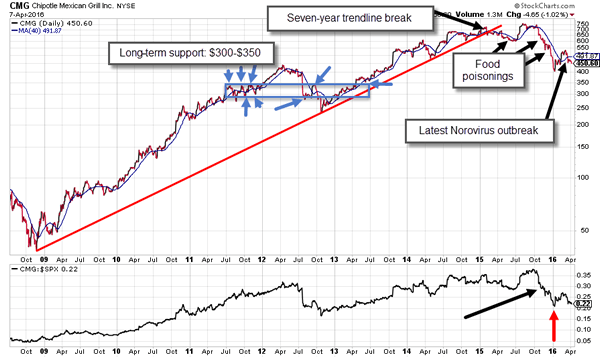 Former Investor Darling a Great Deal or a Screaming Sell?

Chipotle Mexican Grill (NYSE: CMG) was one of this decade’s hottest stocks — surging more than 700% from about $ 90 a share at the start of 2010 to a high above $ 750 in August of last year. Investors seemed as crazy about the stock as customers were about the casual Mexican chain’s burritos.

During that time, annual sales tripled and the number of stores across the country and the globe roughly doubled to about 2,000.

But after several Chipotle locations were plagued with outbreaks of E. coli and other food-borne illnesses, customers and investors rushed for the exits.

For a company that bases its reputation on high-quality food offerings, or what Chipotle calls “food with integrity,” the negative media attention that followed was particularly damaging, and shares plummeted nearly 50% in five months.

But in mid-January, as the stock dipped below $ 400 and its P/E ratio fell to a level not seen since 2010, bargain hunters stepped in.

Shares jumped 36% before another Norovirus outbreak in early March stopped them in their tracks. They now sit just 13% above their January lows. And no doubt some of you are wondering whether you’re getting a second chance to buy this former investor darling at a deep discount.

I’m here to caution you against it.

Chipotle: On Sale for Good Reason

The company has taken some highly publicized steps to fix its food safety and image problems, including shutting down all of its stores for a food-safety briefing and giving away millions of free burritos.

But despite these efforts, or because of them depending on how you look at it (a Reuters article estimates the giveaways could cost the company more than $ 60 million), management warned they could post a per-share loss of $ 1 or more in the first quarter. This would be Chipotle’s first loss since going public in 2006.

Meanwhile, same-store sales continue to decline, falling 26% in February and 24% in the first two weeks of March. And new food safety protocols and labor costs are likely to continue cutting into profit margins. So, when the company reports Q1 results later this month, it’s doubtful investors will find much to cheer about.

Even before people started getting sick, CMG was rolling over. The stock broke its secular, seven-year uptrend line early last year. While shares went on to make a new all-time high in July, they were quickly brought down as reports of outbreaks started popping up around the country.

Even more disconcerting is what we see in the lower panel of the chart, which displays CMG’s price action in relation to the S&P 500.

The stock has been underperforming the broader market index since October, with the ratio line hitting a low early this year. After a slight bounce, it now looks ready to set a new low — a decidedly bearish sign.

This concept is known as relative strength (RS), which leads me to…

The No. 1 Reason CMG is a Sell

I’ve developed a stock-ranking system based largely on the concept of relative strength. The system combines RS with a key fundamental metric to give stocks a score ranging from 0 to 200. We call it the Alpha Score, and the higher the number, the better.

Stocks with the highest Alpha Scores have gone on to deliver returns of 115% in six months, 135% in 10 months and 242% in a year. But the flip side is just as important. The Alpha Score keeps us out of stocks that are lagging the market — no matter how enticing they may look at beaten-down levels.

CMG has an Alpha Score of just 64 out of a possible 200, which is absolutely dismal. In short, this is not the time to go bottom fishing in Chipotle.

When will the time be right?

Well that’s the other great thing about the Alpha Score: It will alert us when the tide has turned so we can potentially enjoy the ride up without the scars left by trying to catch a falling knife.

For instance, in an upcoming article, I plan to tell you about a long-dead sector that is staging a huge turnaround. After months of remaining dormant, the Alpha Score is signaling buys for two companies with the greatest potential to soar. (Mind you, while the Alpha Score remained dormant in this particular sector, it led us to plenty of winners in other sectors of the market.)

In the meantime, if you’re interested in learning more about this powerful indicator, I put together a presentation that explains exactly how it works. You can access it for free here.