As I’ve stated in previous reports, these two indices are particularly important because they tend to lead the broader market both higher and lower. So last week’s poor performance is not a good sign for the market as we begin the second quarter, especially considering both are in negative territory year to date.

The financial sector was the poorest performer, losing 2.9%. The table below, which displays Asbury Research’s own ETF asset flows-based metric, shows that the biggest outflow of investor assets over the past one-week, one-month and three-month periods came from financials.

Further weakness in financials, which is what these asset flows point to, would indirectly suggest flat to lower U.S. interest rates later this quarter, which I will discuss in more detail later in the report.

3 Reasons to Play Defense This Week

First, in last week’s report, I mentioned that the benchmark S&P 500 was closing in on a formidable band of overhead resistance from 2,082 to 2,116. Second, I pointed out that, according to seasonal data, the index peaks for the year around the third full week of April, which happens to be next week.

Finally, the chart below shows that the Moving Average Convergence Divergence (MACD) indicator — a popular momentum metric that plots the difference between a 12-day and 26-day exponential moving average — is declining from a positive extreme that coincided with or closely led five previous peaks in the index. 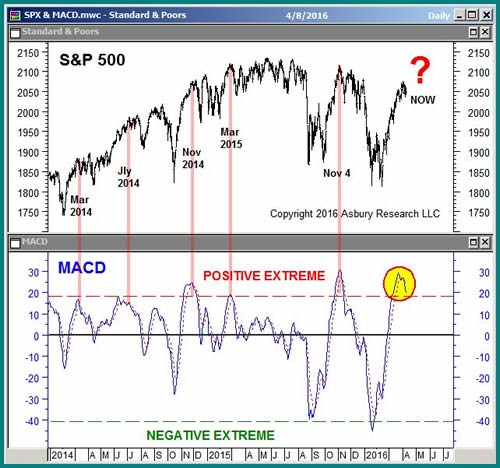 So, according to MACD and almost 60 years of seasonality data, the S&P 500 remains vulnerable to a pullback of some significance before overhead resistance at 2,082 to 2,116 is broken.

Now that we have determined that the S&P 500 is vulnerable to a bearish reversal from its overhead resistance zone during the next week or so, the next question is: How do we know when the reversal is really under way?

One good way to answer that question is by monitoring investor fear.

The next chart plots the S&P 500 and the Volatility S&P 500 (VIX), or fear gauge. The last time the S&P 500 underwent a significant decline was when the VIX made a sustained move above its 50-day moving average. 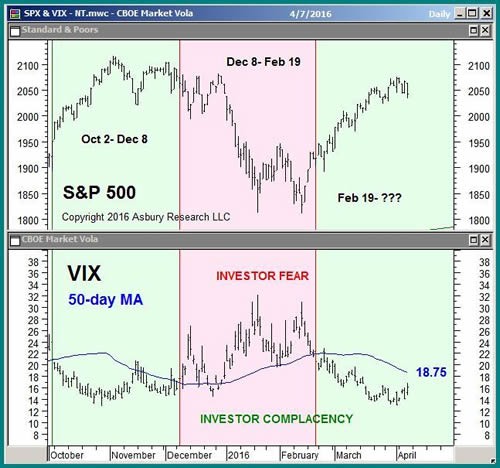 Data shows that a move above the VIX’s 50-day moving average — which represents a shift from investor complacency to fear — has closely defined every broader market decline during the past several years.

Therefore, I would view a rise above the 50-day this week, currently at 18.75, as evidence the reversal I’m expecting is actually under way. Without that trigger, stocks are likely to continue grinding higher on a near-term basis.

Yields declined as expected last week, falling 9 basis points to set a fresh closing low of 1.70% on Thursday before finishing the week at 1.72%. 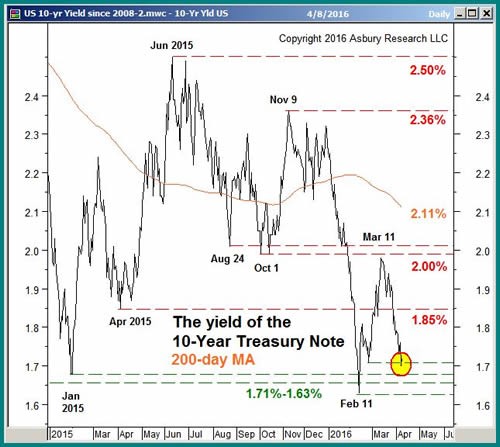 Recent investor asset flows out of the financial sector suggest the latter, which I would view as a sign that the forward-looking bond market is pricing in upcoming economic weakness. This would support a meaningful bearish reversal in the S&P 500.

In the Feb. 29 Market Outlook, I told readers that two closes above the trendline at $ 24.67 in the iPath Bloomberg Copper Subindex Total Return ETN (NYSE: JJC), which closely tracks copper prices, would target a 10% advance to test its 200-day moving average.

That test took place over the next week as JJC rose to a high of $ 26.71, after which I suggested readers who were long take profits in anticipation of a resumption of its five-year bear market. 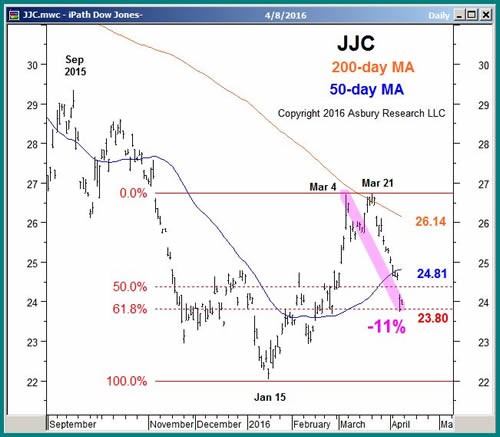 This sharp bearish reversal has broken the 50-day moving average, now at $ 24.81, a minor trend proxy, while positioning JJC right on top of the 61.8% retracement of its January to March advance.

According to retracement theory, a sustained decline below $ 23.80 would confirm that the January rally was just a correction in a bear market and that the larger bear market has resumed. Since copper prices are often viewed as an economic barometer, this would signal global deflation fears are reemerging.

Purely from a risk/reward standpoint, the S&P 500’s current position just below formidable overhead resistance at 2,082 to 2,116 is not a good spot for investors to put new money to work.

Moreover, the current extreme in positive momentum and the seasonal tendency for the benchmark index to peak for the year over the next week or so are two more good reasons for investors to consider taking measures to protect their assets against a bearish reversal. I would view a sustained rise above 18.75 in the VIX this week as indirect evidence that this potential decline is under way.

Editor’s note: We just entered a short-term bull market. Over the next six weeks, hundreds of stocks — both large and small — are going to deliver double- and triple-digit gains practically overnight.

This isn’t your typical bull market, though, and many traders won’t even know it’s going on. And if you want to take advantage of it, you need to hurry, because you only have a brief window of time before it’s gone. Click here to find out exactly how to profit.