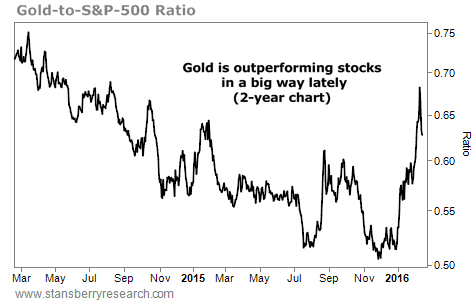 Did We Just Witness The Start Of The Great Gold Bull Market?

Gold is on a tear.

But it looks even stronger when you compare it with stocks…

You can see this clearly in the chart below of the gold-to-S&P-500 ratio:

Is this just a short-term bounce after a grinding, four-year bear market? Or is this the start of something bigger for gold? Both the macro environment and the technicals point to higher prices for gold.

The biggest strike against gold is that it doesn’t yield anything. But thanks to a global race to the bottom for fiat currency, neither do government bonds.

Yields on the 10-year Japanese government bond went negative for the first time in history this month. German government bonds are negative out to February 2024. And 10-year U.S. Treasurys sport near-record-low yields (currently around 1.8%).

The environment for savers and yield-seekers is bleak. And negative yields make holding gold advantageous.

And he’s right… The “dots” that Gundlach is talking about are the Federal Reserve’s projections of interest rates over the next three years – which are published in a “dot-plot” format. The Fed’s dot plot shows short-term interest rates rising from next to nothing today to more than 2% by the end of next year… and more than 3% by the end of 2018.

“The market is going to humiliate the Fed,” he said. “It’s bizarro to have rate-hike projections while at the same time, [Federal Reserve Chair Janet] Yellen is talking about negative rates. What a mess.”

Think about that: Yellen and the Fed are saying they will raise interest rates 12 times by 2018. But the smart money is betting (through interest-rate futures) that the Fed won’t hike rates at all until 2017.

Big banks are the engine of an economy, taking deposits and making loans to business and individuals. When their share prices plummet, it’s an ominous sign for the economy. And today, shares of bank giants like Deutsche Bank, Credit Suisse, and Standard Chartered are trading below their subprime crisis levels.

Again, a cratering financial system – backed by fiat money – is bullish for gold.

The Market Vectors Gold Miners Fund (GDX) is up 37% so far this year. Even the biggest gold miners are soaring… giants Goldcorp (GG), Newmont Mining (NEM), and Barrick Gold (ABX) are up 36%, 39%, and an incredible 70%, respectively, this year.

Stansberry Resource Report editor Matt Badiali is getting bullish on mining stocks. He wrote in his latest issue…

The smaller gold miners have fared even worse. The Market Vectors Junior Gold Miners Fund (GDXJ) – which holds a basket of smaller-cap exploration firms – has fallen nearly 90% from its April 2011 high. It’s down about 30% in the past 12 months.

When a sector has been down this long… there’s not much optimism left, and investors give up on the sector. For example, attendance at investment conferences dealing with mining is down to a trickle. Why would investors stick with a sector that just keeps getting crushed?

But here’s the good news… this is exactly what a bottom looks like.

In that issue, Matt put together a “wish list” of mining companies to start monitoring. And he’s currently working on a special report with his top buys in the sector. It should be finished this month.

You see, the big move higher came on the heels of a steep decline that took gold stocks to a 13-year low. GDX dropped 16% in seven trading days. On January 19, it closed 81% below its 2011 high.

Some of the most popular gold stocks had it even worse… Gold royalty firm Royal Gold (RGLD), for example, plummeted 35% in eight trading days. Yamana Gold (AUY) fell 33% in seven days… and Seabridge Gold (SA) dropped 38% in seven days.

This sort of steep drop – one that takes an asset to a new short-term low and is followed by a big rally – is called a “shakeout”… And it could mark the end of the four-year-long bear market in gold and gold stocks.

And Stansberry Short Report editor Jeff Clark has already been racking up big gains in the gold sector. He went bullish on gold stocks late last year, after GDX made a higher low in November.

Stansberry Short Report subscribers were able to lock in gains of 47% in just 11 days in gold, and 14% in 28 days in gold stocks, as gold moved higher into year-end.

Jeff then turned longer-term bullish earlier this month, when he called gold stocks the “only sector that looks promising” today. As he wrote in the February 4 issue of the Stansberry Short Report…

The only sector that looks promising for higher prices over the next several weeks or months is the mining sector. After nearly five years of a bear market, mining stocks are finally showing what could be some sustainable strength.

When several of our analysts are bullish on the same thing, you should pay attention. That’s often when the biggest gains come…

Crux note: We want you to read all of the research from our team of analysts… especially when several are bullish on the same thing. And with the Stansberry Flex program’s “Open House” offer, you can do exactly that.

It’s a way to access EVERYTHING we publish for $ 99. But don’t delay… this offer is only open until March 9. To take advantage of this program before enrollment closes forever, click here.